The Rhythm of Fierce: interview with Ellie O’Byrne

Ellie O’Byrne hosts a weekly arts and culture show in Cork. She came to see a run of The Rhythm of Fierce during our final week of rehearsals at Firkin Crane and when she joined in the dancing herself at the end of the run, I knew she’d be a sympathetic interviewer. Here’s what we talked about: 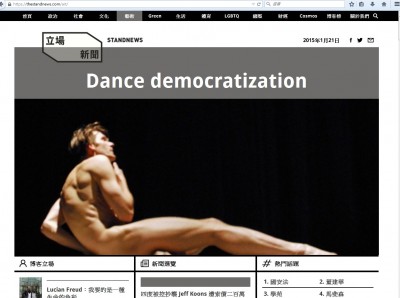 “Democracy” is Hong Kong’s keyword of the year 2014. “Democracy” is a fragile word because it dies with attempts on its own definition. It is also a slippery word because it invites imagination and interpretation of all sorts. To me, one can almost place “democracy” and “dance” in the same cognitive bucket, the former being an idea and the latter being its expression. If democracy absolves standard of practice from one single source of authority, if it requires courage to openness and admission of differences to propagate, I propose that “dance democratization” has been diligently put into action in two works shown during i-Dance (HK) 2014 in December.

Who makes dance? What qualifies a dance-maker? CURE by Irish dance artist Fearghus Ó Conchúir is an one-hour performance made up of six parts, each created by an individual who may possess dance background, or may not. Ó Conchúir stitches these parts together – seamlessly, without sacrificing any trace of the creator’s distinctive touch. One can easily tell one part from another because they are so different, yet they exist peacefully alongside one another like fetuses sharing the womb. If choreography is about the placement of the body in the space and each of us manifests our existence through this vessel named “body”, it is just natural that everyone has his version of choreography. If dance-making is about epitomizing the body as a medium of communication, this is what the performance is about.

“What does it take to recover” is the question behind the CURE concept. The dance-makers investigated the emotions they went through when they fell, and how they picked themselves up. Ó Conchúir, the interpreter of these emotions, demonstrates his powerful expressiveness with his intense concentration. He thinks before he moves, he moves what he thinks. The “dance” is Ó Conchúir’s meticulous control of his muscles and joints. The “movements” are everything that proves his presence, from his breathing to his jetés. The contemplation and the honesty are what draw the audiences to him. In the first part of the performance, Ó Conchúir moves around in a square box of light by the left side of the stage. His manner is carefree, his shifts jumpy. It is a sad view to watch him swing his long limbs in his grey tracksuit: it is as if you see a child playing happily inside a cell, not knowing he has been deprived of a world much bigger than this. In another part, Ó Conchúir sits on the floor at the center of a circle of chairs. He slowly pushes the chairs away from him with his legs. The noise of the legs of the chairs scratching the floor is the muted scream of Ó Conchúir’s, whose over-stretched chin muscles fail to make any sound. In yet another part, the naked Ó Conchúir kneels on a piece of silky fabric. With ritual-like dedication he flexes and relaxes his muscles, sweat rolls down as he breathes in and out to fuel his seemingly subtle movements. Finally, he lays face-down on the fabric, allowing the sweat to stain the piece, leaving marks of his existence.

If democracy is about the respect for participation, Tian Gebing’s first-ever choreography, Non-Fat-Thug-Waste, is a nice experiment of the cross-breeding of a dancer-maker. Tian is the founder of Zhi Laohu (The Paper Tiger), a theatre group based in Beijing known for its subversiveness. Trained as a stage director, Tian just knows enough about stage performance for him to denounce the reliance on the script, or verbal delivery. His choreography is to place two powerful bodies, those of Gong Zhonghui’s and Wang Yanan’s, into the space and interact with time, that is, to move, either in connection to or against the verbal instructions given by Tian. Both Gong and Wang are seasoned dancers, but in very different ways. Throughout the performance, the skinny Gong repeatedly throws herself to the floor or dashes from one end of the stage to the other, hardly catching her breath. Wang, plump and sexy as a Dunhuang dancer, elegantly moves her wrists and fingers and head, making a step only once in a while. The “dance” actually takes place on her face: her facial expression changes from a smile to a frown then to a sob then to a scream while her fingers twist and her wrist joints rotate. She makes up her share of the “moves” towards the end of the performance when she ties the end of her braid to a wire hanging from the roof. Then she slowly walks away from the wire until it pulls her braid so hard that you can see her hair standing on ends on her scalp. She talks, she laughs, she cries while she walks, in silence. When she cannot go any further without tearing a piece off her scalp, she all of a sudden regains her composure, releases her braid and stands still.

To me Tian has no doubt made a dance. He has demonstrated his ability to identify the power in two bodies and through them deliver his contemplation on the nature of performance: What is it? Who decides what happens on the stage? What makes an audience listen? He doesn’t design movements, he probably cannot. But he respects movements and the bodies that make them, and more importantly, he believes in the instantaneous expression by the powerful bodies he has identified. He creates the space for honesty to flow, from the performers to the audiences.

Postmodern dance-makers have been expanding the possibility of stage representations by working with artists across of art forms and applying multi-media elements such installations, sound, video, computer applications, and other you-name-it. In these two performances we see “multi-media” being an adjective of the dancer-makers’ background instead of the accumulation of stage techniques that take attention away from the body. If democratization embraces openness, it invites challenges and new ways of doing. The aesthetic lies in the forte of one’s urge to communicate, in how the dance-makers and their interpreters together devote their utmost attention and “training” to the body as the ultimate medium of manifestation.

In 2014 we practiced the choreography of placing our bodies where they should be for causes we believe in. We witnessed the power of the body’s presence in the space. We saw actions growing into movements. We saw dance.