The Goethe institute in China has published a pamphlet called Beijing Parkour, assembling a series of maps and elevations of various districts in Beijing that together creatively revisioning space in the way that Parkour encourages.

The pamphlet contains an interview with Michael Kahn-Ackermann. He was an exchange student in Beijing in the seventies and returned there as director of the Goethe Institute in China in 2006.

In the interview, conducted by Shi Jian and Cui Qiao, the institute’s Commissioner for Cultural Programs, Kahn-Ackermann discusses his own cross-cultural experiences:

Cui Qiao: What do you think Beijing is lacking? MKA: Beijing lacks – I’m not sure what it’s called in Chinese, but it’s the urban atmosphere of a major metropolis. Beijing has it all except for that particular atmosphere of its own. Shanghai can’t compare to Beijing in many respects, and from a cultural perspective Shanghai is a desert, but it has that atmosphere, which you can sense if you’re walking around. Beijing’s problem is not one of size but one of space. It’s empty, regardless of the area you’re talking about.
SJ: Not the notion of emptiness in traditional Chinese culture, but geniune emptiness. MKA: Pure emptiness.
SJ: There’s no urbanity. MKA: Right, no urbanity. I feel that the fundamental issue is that old Beijingers have a sense of mission. In the 70s, Beijingers could still feel that it was “my Beijing” – they “administered” the city; sure, they way they administered it was not by demonstrating, not like the citizens of metropolises in the west, where if you want to put up a tall building, a crowd will form immediately in opposition. Not that type, but it still was absolutely an identification with the city. No matter how large the city grew, you could have that sense of mission: this is my city, this is the city I want, this is where I was born, where I grew up, and I will die in this city. Today, because of Beijing’s changes, that sense of mission is gone: these changes have nothing to do with me, I’m someone whose life has been transformed, entirely involuntarily. I feel that this is not a problem unique to Beijing, it’s shared by all of China’s major cities.

What interests me here is the sense that the physical transformation of the city has deprived its residents of the means to identify with their environment. Kahn-Ackermann doesn’t quite explain the difference between earlier change (‘No matter how large the city grew, you could have that sense of mission.’) and this more recent phase of development that has rendered the city empty, even as it is full of gargantuan building projects. Is it the scale of this latter development, that bears no relation to human proportions, that is so alienating?

I’m still flummoxed by the huge towers in the Central Business District. I can rarely find the entrance. Intending to join a friend for drinks in the China Bar at the top of the Park Hyatt in Guomao, I spent a half hour trying to locate the building when I was just across the road from it and another ten minutes pacing the perimeter of the building trying to find the entrance which, in case you need, is on the inside of the building complex. I just don’t know how to read these constructions. 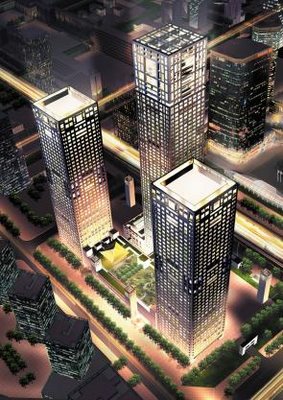