When I applied for the Hatch residency at Dance Ireland earlier on this year, I was aware that I wanted to use it as an opportunity to reconnect with parts of my archive – the kinds of things I done in my career already – that might be relevant to where I find myself, where we find ourselves now.  There’s a risk for a ‘mid-career artist’ in looking back – it may seem like you’ve got nothing new to say and so much of our work in a contemporary art form has been about novelty and innovation.  But I’ve grown suspicious of novelty that doesn’t recognise its roots, its connections to lines of enquiry, networks of learning that others (perhaps less recognised) have provided so that this apparent ‘novelty’ can emerge.  There’s something sustainable in this return to the archive, this reworking and repurposing and from the deepening of knowledge that might come from looking again at what one has done. 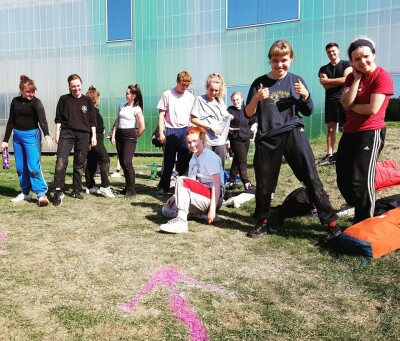 Today, I started teaching to 3rd Year students at Trinity Laban, solo material that I developed, danced and re-danced through the Bodies and Buildings research that I started in 2007 [The link is to my original blog but all of the material is on this website blog too].  There’s no definitive version of the material, But I trace its origins to a dance I did in Shanghai as I recovered from food poisoning (for all my aspirations to corporeal and conceptual openness, my body didn’t enjoy chicken’s feet) and that I evolved during my time as Artist in Residence for Dublin City Council.  I went back to this performance from outside an office block in the Dublin Docklands to provide the bulk of the material. 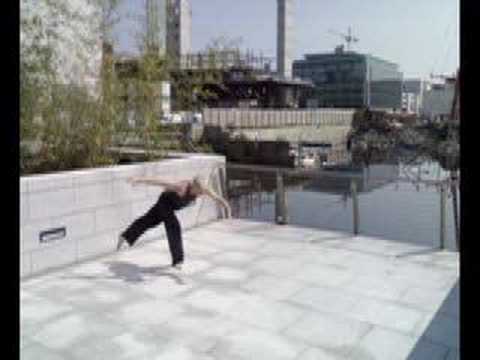 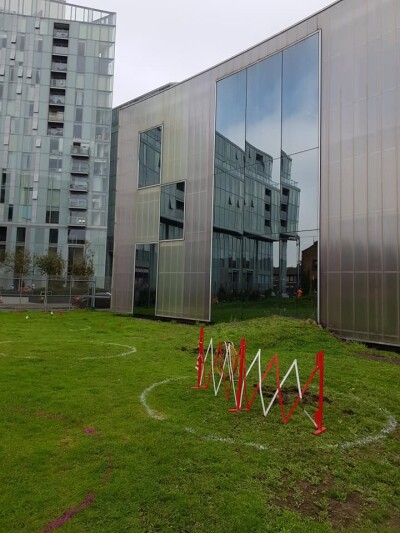 Because no dance text exists apparent from my body and the performance in different places, I taught a movement sequence today as scaffolding for the students to dance the solo.  By ‘scaffolding’ I mean that I taught a clear set of movements for them to follow, and I wanted them to learn these movements accurately in the same way that one would want one’s scaffolding to be strong and secure.  But the scaffolding is not the building.  And the movement sequence is not the performance.  It’s a support that will help them perform the solo live in relationship to the physical, emotional, climatic, social that they find themselves in.

Knowing that the Trinity Laban Dance Faculty is housed in a relatively new prize-winning building designed by architects Herzog and De Meuron and that its construction is part of wider projects of urban development that has transformed the former docklands environment, re-connecting with the original context of the bodies and buildings research in areas of rapid urban change (like the Docklands in Dublin that are now home to headquarters for Google and Facebook and the Irish Financial Services Centre) made sense.  It was also familiar to find the grass amphitheatre in front of the building where we’re doing the work was also the workplace for high vis clad engineers and workers who were sinking bore holes and using a variety of fascinating ‘sculptures’/markers and barriers to define and decorate the space.  Their digging reminded me, as before, that there’s a buried world supporting our existence, a hidden, subterranean network that literally and figuratively has the foundations of what we do in the light and on the surface. 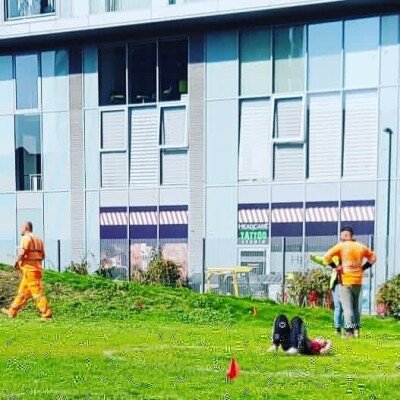 I was also reminded of networks of support and influence when Ellen Van Schuylenburch – a teacher of Cunningham technique at Trinity Laban who also taught me when I was a student and whose class I’ve taken frequently since – appeared unexpectedly.  Her presence underlined the physicality that is part of the material I’ve given the young dancers, my own debt to the history and knowledge that Ellen carries and also to wider lines of choreographic work in public space .  Whether it’s Cunningham’s events or street dance battles or Darren Suarez voguing with friends outside Liverpool Catherdral, theres’ a long history of dance’s appearance in and claiming of public space. 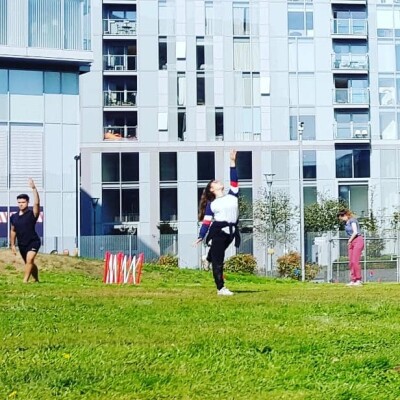