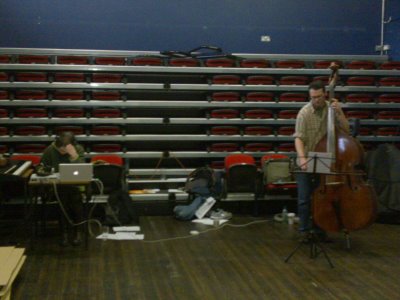 Just one week until the premiere of Casadh Arís. Dan arrived with his double bass today, changing the acoustic and physical space with his presence and that of the large resonant bass.

For Casadh Arís, Rachel has been working with live and electro-acoustic sound and I’ve realised that the recorded sound in particular sets up a kind of architecture for the live bodies to inhabit. I say live bodies because the live musicians inhabit the space just as much as my dancing body does.

Using four speakers in the corners of the room, she is able to define the limits of the space, fill its volume with volume, and determine the density of the environment through which I move. Of course as a performer, playing violin, she will periodically enter that space too. She holds the space and participates in it.