Cure at The Mac, Belfast 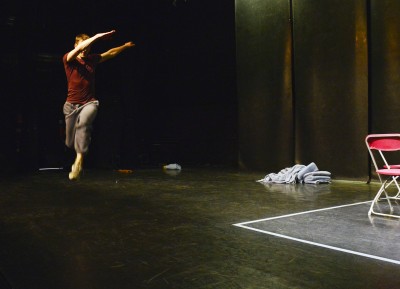 I chose to present Cure at the Mac in Belfast at the beginning of April for a number of good reasons. None of them were commercial. I was glad that the MAC fee meant that I was able to pay the rest of the team for their work on the performance (though they were more generous with their time and input than I could be with money). There wasn’t enough money to pay me which means that I paid (in time, in energy) to perform and Project Arts Centre didn’t get paid for its work. Why do the performance then?

The work is alive when it’s performed. And so is a particular way of embodiment for me.
If I don’t perform I worry that Cure is over – finished in my body, finished as a work available to be performed again. Performing keeps alive the possibility that there will be another performance. Therefore, to perform it at the MAC was a pragmatic and an emotional decision.

I can afford to do this performance without payment because I earn income through other work, as curator at Firkin Crane, facilitator for the Clore Leadership Programme, PhD student at NUIM, coach and mentor for other artists and arts professionals. However without staying connected to the challenge, gift and discipline of Cure (and the immersion in dancing, creativity, thought and relation it encapsulates) I don’t think I’d have anything useful to offer in those other roles. It is what Cure teaches me, as a performer, as choreographer, as a human, that gives me the resources I need to share in other contexts.

It wasn’t easy to prepare for this single performance. For the premiere and the two performances that followed quickly after it, I could devote myself full-time for 3 weeks before the performance to physical and mental rehearsal. Re-rehearsing for the Autumn required a different approach which was less frequent but nonetheless sustained over a period with at least weekly performances. For Cure at The MAC I was fortunate that a previously arranged week of residency at DanceHouse preceded the performance. That meant that I could run through the material each day after warm-up; but the residency had other focii too. And my other roles meant that lunchtime and evening meetings required a certain amount of mental attention too. I wondered in the days leading up to the show what impact these circumstances would have on my preparation for Cure. It isn’t that I wanted to recreate the conditions of the premiere performances: I wanted to understand instead what performing Cure means now in my life and how I can integrate that kind of one-off performance in a way that still give the piece the preparation it needs.

I folded at least one origami crane a day for 5 weeks before the performance. 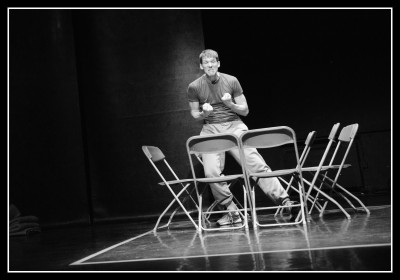 There is a very practical need to be physically capable of satisfying the piece’s physical demands. I want an audience to recognise the physical challenge but not be anxious about me as a performer not being up to the challenge. There is also a mental challenge to know the material well enough to be able to embody and communicate it and to do that in a way that is sensitive to the nuances of the choreography. I was happy that returning to Cure after a break of some months, I could remember the material with relative ease. There were moments that I needed to clarify, moments that hadn’t been uncertain before, but they were isolated and readily recalled. Rehearsing without the blankets, or salt or concrete or the chairs until the last week, I was concerned that my familiarity with those materials would be diminished, relying on a memory of them rather than on active or activated relation. I never want Cure to be about ‘managing’ to get through the performance. The choreography has been crafted and cared for and I have a responsibility to the work present it with the same care and with a kind of security that helps reassure an audience and allows them to relax into connecting with themselves through the work. In my approach, such reassurance is what permits me to draw the audience a little further, a little deeper than they might otherwise. So being able to perform the work with some kind of ease (it’s never easy) is important.
Ian Patterson’s review of the performance that appeared in the culturenorthernireland.org website is for the most part gratifying, especially in the detail of his attention and engagement and in his willingness to communicate a visceral, emotional response as well as a rational account of what he saw and thought. I was a little concerned that his language ‘dance macabre’, ‘painfully visceral’ suggested that I might have substituted physical intensity for subtlety, pushing my performance with a one-note effort. I take comfort from the fact that he felt the performance ‘provokes a gamut of feelings’, even if the list that follows ‘raw, bewildering, edifying and shocking’ isn’t very varied!

What was also very gratifying was that returning to Belfast after the work with Maiden Voyage in the summer felt like a positive return to a familiar place. I felt very much supported by the local dance community and valued that sense of connection. And hosting a supper in the MAC on the eve of the performance for a mixture of MAC staff, visual artists, choreographers, writers and curators helped me to feel that enabling connection also. 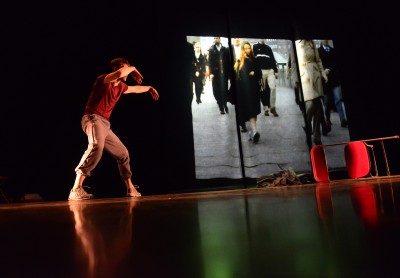