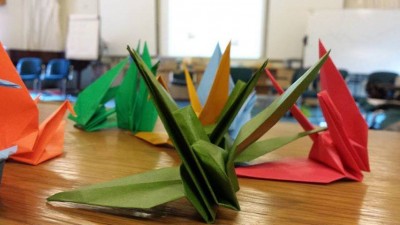 Last night’s performance at Siamsa Tíre was one of the most challenging versions of Cure I’ve done to date. Preparing for the tour has been different to preparing for the premiere. Instead of concentrated time in a dance studio, I’ve been rehearsing the material in bedrooms and conference rooms as well as the occasional dance space, integrating Cure with the other things that I do. I’ve kept folding a crane a day. 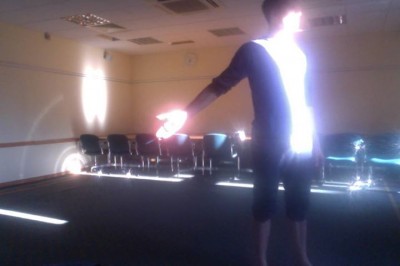 At Siamsa last night the audience was small but what was difficult is that they were far away. Siamsa’s auditorium is luxurious but quite big and people seemed to sit away from the stage that also has an apron in front of it creating more distance between the seats and the playing area onstage. Fortunately my talking to people after the opening section meant that I had some sense of where people were; but throughout the performance, I found it difficult to feel their connectedness and had to draw on other resources to sustain the energy of the piece.

It’s not about the size of the audience, though. Last week at glór in Ennis, we had a similarly small audience but something about the seating arrangement that brought the audience close to the stage meant that I felt their involvement throughout and could build on that. Also, and this is perhaps crucial, I had had an opportunity to host a Cure-focused lunch the day before the performance, following the model of the Cure supper we had before the premiere in Dublin. There were just 10 people at the lunch but facilitating a discussion around personal experiences of recovery and drawing lessons from that filled me with information that fed the performance next evening. As I remind people, Cure may have a single performer on stage but it doesn’t feel like a solo. It’s only possible because that my body onstage is connected to a network of others who inform me. Part of my job as performer is to remain permeable to new information that can feed the work, as well as staying in contact with the impulses that have created the work. 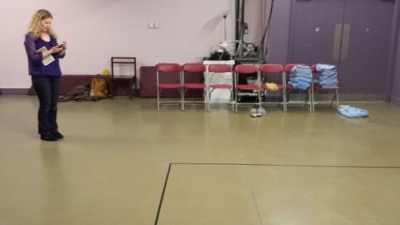 In Ennis, I felt I’d planted the seeds for a brief community to emerge around Cure. At Siamsa, even though I have a long and happy association with the National Folk Theatre of Ireland, I didn’t have that opportunity to establish a connection locally before the performance and it tells me something that I felt the lack when I performed. Happily, the post-show discussion, for which over half the small audience stayed, suggesting that the performance itself had generated a connection. There were a wide range of people at the talk, one for whom it was his first experience of dance and who was grateful to have the opportunity to hear someone talk about the processes and ideas involved in something that was so new to him. Another man noticed and appreciated the economy and detail in how materials were used in the piece. He seemed touched by the folded chairs. There was an older gentleman who spoke beautifully about how he enjoys contemplating forms and movement in nature, in animals and in rock formations, and could read and respond to the dancing with the same attentiveness. We discussed what it was that prevented more people coming to see contemporary dance and one woman suggested that some people might be uncomfortable having experiences, sensations and emotions for which they have no vocabulary. If that’s true I wish I could find the way to reassure people that it’s ok not to have the words. I am always happy that the right people find their way to the performances (I don’t expect that it’s for everyone) but I do believe there are more people that could be the right people if only I could let them know that it will be ok. The challenge is that some of what people appreciate is exactly what would have put them off coming if they’d known it in advance. That post-show discussion reassured me that Cure had a resonance in Tralee, as it did in Ennis. And it’s that reassurance that makes the investment of time, resources and energy worthwhile, for however many people see it. Thanks to the Arts Council’s investment in touring that is possible in practice.