I think shame is at the root of our current financial crisis and all the problems in our country. Shame affects everyone who holds back the whole truth of who they are because they are afraid of rejection, and that means almost all people. Shame eats away at us and makes us less creative, less productive and less willing to contribute to society. Shame makes us independent rather than collaborative. It makes us pessimistic rather than optimistic. It makes us care less about our health and it leads to addictions, anxiety and antisocial behaviour. The cost of shame is immense.

Treating each other with dignity is as simple as honouring what’s underneath our individual masks. We’re all human beings and all equally worthwhile. The ripple will be infinite when all people are respected and all love is celebrated the same way.

Chris Morris writing in The Guardian

Morris’s whole article situates itself in relation to debate about marriage equality. He no longer categorises himself as Gay (deliberate capital G to indicate a particular identity) but he has been in love with his male partner for many years and wants to be able to recognise that love in marriage, equal in his loving to the love between heterosexual partners.

I am drawn however to his connecting of shame to the current financial crisis and ‘all of the problems’. It seems hyperbolic and yet there is a connection between the micro and the macro, the personal and the political that makes sense to me as I think about recovery.

His injunction to treat each other with dignity connects to our work in E.motional Bodies and Cities Research. As I arrive in Cyprus today to resume the next phase together on that project, I realise that I will be weaving together Cure and the E.motional Bodies 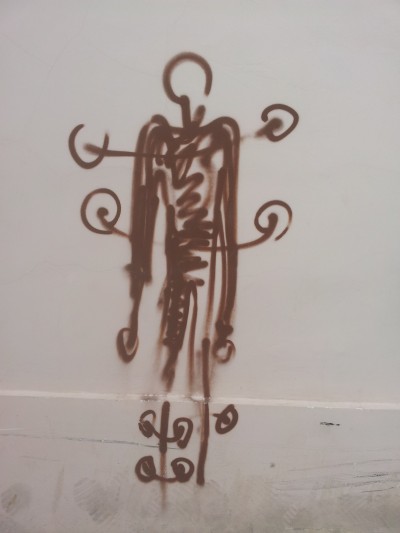 Image on the wall in Limassol

In relation to respect, dignity and sexuality I am confronted by, on the one hand feeling that Limassol is a welcoming generous place (we have been welcomed with warmth by all the Cypriots involved in the project) and on the other, feeling I need to arm myself against the homophobic cat calls I’ve experienced pretty consistently since we arrived (That coupled with being propositioned by a strange man in a Mitsubishi van on the sea front which could!) All of which makes me think about what it means to be at home, what it means to feel safe, to belong.