Cure – Final rehearsals before the premiere

It’s been an effort to make myself write about the final rehearsals and first public performances of Cure. It’s not that writing and reflection isn’t important but I, with the help of others, have put much energy, focus and attention into the embodiment of the work, particularly in the concentrated form of a performance, and writing about it doesn’t have the compelling necessity that dancing it does. Maybe the difference is obvious from that last phrase – to write about it (outside it, around it, at a remove) and to dance it (do it, be it, no space between). That doesn’t mean that I’m not happy that Cure might stimulate others to respond in a variety of ways that include talking and writing. 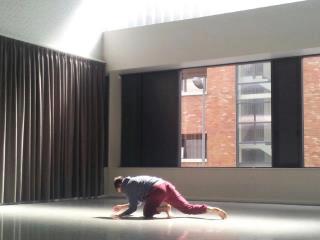 In the first week of final rehearsals in Dublin, I organised with Create and The Dublin Dance Festival to host a supper at The Firestation Artists’ Studios where, over home-cooked food, we could discuss cure from different perspectives. The idea of having such a supper came from the very enjoyable lunch I was asked to curate for Metal as part of their Liverpool Biennial activities last year. At the supper, care and attention was given by Katherine Atkinson and Patrick Fox of Create in preparing food and the space, and by Julia Carruthers and the whole team at the Dublin Dance Festival office who prepared food and helped generously with the serving on the evening. I expected that I’d have to do the food preparation myself, and I did make enough soda bread to feed 50 people!, but I was very grateful that people who were very busy themselves took the time to help. For the 20 or so people who attended, I facilitated conversation about what cure and recovery might mean, and we encouraged the guests to leave notes on the table cloth and write postcards about what they were taking away from the event. 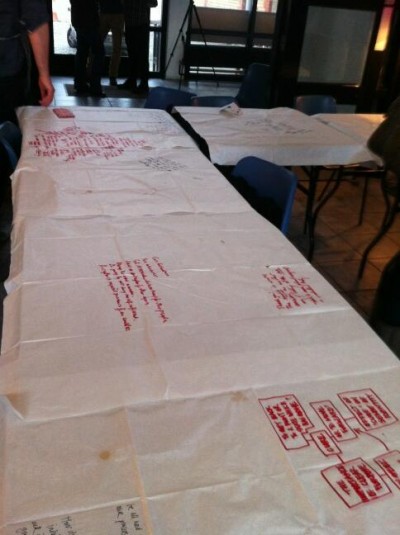 However, beyond this discursive element, there was an engagement that happened at another level, a connection to self and others that happened in the short qi gong warm up I led, in the gathering around a table to share food, in the time taken from other concerns to sit with strangers and listen. Whatever the discursive outcome of that supper, I was happy that we had, through care and thought, created an atmosphere that connected people in warmth, enquiry and openness. And this was already part of Cure, if not one that would be directly manifested in the performance.

The first week of my final rehearsals at Dancehouse, I taught professional class. It’s been a growing pleasure to find a dynamic and skilled dance community taking class in Dublin. Part of the pleasure for me comes from seeing familiar experienced dancers sharing the space and energy with a new generation of performers. In the context of Cure, I was glad to be able to share some of the old knowledge in my body with this group. And it was good for me to start each day with the energy of a group to lead me in to my own rehearsals.

One of the things I noticed straight away in the studio was that it was unfamiliar to have a production team (Ciarán the lighting designer, Alma the sound designer, Mags the stage manager) sitting in rehearsals watching me. When I’ve made solo work before, I haven’t had a team to help, and when I have had a production team, it’s been making work like Tabernacle where there’s been a group of dancers for me to focus on, while the production team watch and take the information they needed. For Cure, I had to manage my own sense of having to display something for the people watching. I also had an immediate sense of guilt that other people’s energy was directed towards me. But once I established a rhythm to rehearsals (warm up, run on my own, lunch, warm up for the team, notes and discussions), the guilt eased and instead I felt energised by the supportive watching. I knew in their watching Alma, Ciarán and Mags were trying to make sure that the performance would be as good as it could be. It quickly made sense to me too that they should be in the studio since, even though it’s a solo, I never imagined Cure as a solitary procedure. It was always designed to be made with others (the choreographers) and directed to others (the audience). Being in the studio on my own was fine at the beginning of the day but solitude wasn’t the goal and it wasn’t a useful thing to practice since the real task was to understand how the material of Cure worked with an audience and how I should be to mediate that relationship.

In addition to the production team, I opened rehearsals to whoever wanted to come to see the afternoon run-throughs. It was very helpful to practice being nervous in front of people and to experiment with how to present the material to them in different ways.

I became nervous again when it was time for the choreographers to gather and see the work. It was instinct that made me set about making Cure in the way we have. And I responded to that instinctual impulse by organising a structure that seemed fair and could be explained: two weeks with each choreographer, asking each one to make a 10 minute solo: but I didn’t really know how all of that would work out. I’d left a two-week rehearsal period at the end to give myself time to work on assembling the whole piece and I’d left some time with the choreographers to use their perspectives to help with that. In actuality, by the time I arrived in Dublin to start the final two weeks, it was very evident to me how the piece would be put together. I saw that I could go through the different solos in a particular order that made a dramaturgical and choreographic sense. I’d lived with the material in my body, some of it from over a year. On the first day of rehearsal in Dublin, I rehearsed and ran together the first three parts. On the second day, I ran through the other three parts in order. On the third day I ran all six in order and that order didn’t change between then and the premiere. Of course there were daily refinements of and experiments with how I made my way from one part to the next. I didn’t want the piece to feel like six separate solos with six beginnings and six endings. I wanted to maintain the sense of six distinct phases, six different perspectives, but also to create a flow from beginning to end that connected everything. I wanted an audience to see that these different perspectives were carried in a single body. This approach mirrors how I’ve worked with the choreographers as performers and collaborators, respecting their individual contributions, valuing their idiosyncrasies but holding them all together in a structure that makes it possible for others to respect and value those differences too.

In retrospect, it is obvious to me that this is how Cure should be and it is that instinct that was at the genesis of the idea for Cure. But having the instinct isn’t the same as being able to articulate it. I’ve tried to keep the choreographers up to date with how I’ve seen Cure evolve and to communicate to them what I thought the outcome of that evolution would be but I didn’t know as they arrived in Dublin to see the piece, if what I described matched their expectatations. I was clear that I wanted to show them the whole piece together before we worked individually on their sections. Elena and Stéphane arrived in Dublin earlier in the week and had a chance to give feedback already but the Friday before the Wednesday premiere was the first time the others saw the whole thing. It was a little daunting to have their six chairs lined up at the front of the studio and also a little strange to see so literally the reversal of our previous positions. But, as I’d trusted, they were very supportive. They had plenty of notes and refinements to offer and we did discuss whether we should try another order but it became clear that the existing version worked. So we didn’t change. It was a great relief that people felt I’d taken on their material and made it my own as a performer without compromising the integrity of their creation.

Though each of the pieces has a distinct movement quality, I was pleased at how readily connections between them offered themselves up. Mikel’s part used blankets and Stéphane’s part a rug so it made sense to me to substitute a blanket for the rug and condense the materials in the piece. 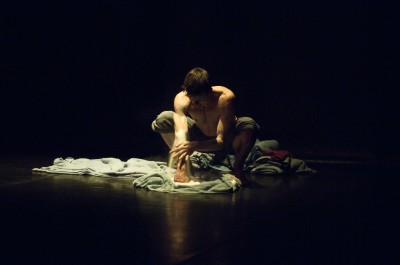 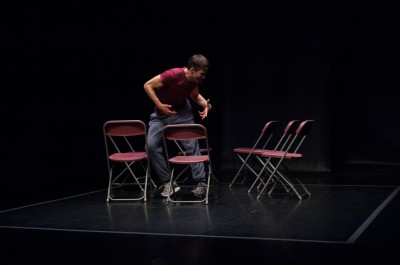 Matthew’s section required chairs and Bernadette had mentioned the possibility of including a chair in her part so I proposed a way to do that which wove the chairs further into the choreography. 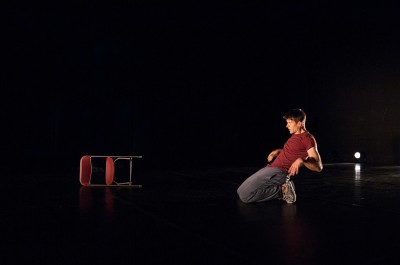 Stéphane had created the solo with a latex prosthetic that for practical reasons was difficult to integrate into Cure. However, without having seen Stéphane’s work, Sarah introduced latex in a different form in her contribution. She had hoped to have a lump of concrete in her section but we didn’t find a way in for it. Instead that concrete (a particular lump that was used to smash the back window of Sarah’s car when we rehearsed in Limerick. We had already been discussing concrete as a toxic legacy of Ireland’s housing boom with concrete foundations underneath the withering ghost estates) helped crystalise a moment in Stéphane’s section that needed a material manifestation in the absence of the latex prosthetic. 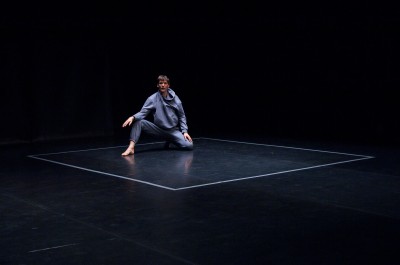 Elena’s folding choreography found echoes in the folded blankets, chairs and latex across the piece. And beyond the piece. As we filled the bar in Project Arts Centre with the 1000 cranes we had each made as part of her task in preparing me for her choreography in Cure. The multicoloured cranes transformed the industrial feel of the bar in a way that a significant number of people were moved to comment on. Like all such transformations, it took a lot of work to achieve – not just the months of folding by Elena and me to make the cranes – but a group effort to hang and arrange and fire-proof them. It was good to feel that we gave the audience some simple delight as a prelude and coda to the performance. 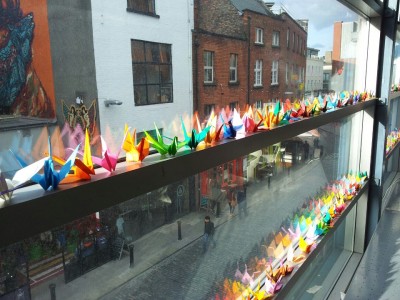 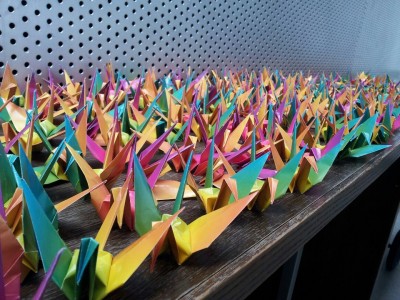