Cure: Rehearsals with Stéphane in Melbourne 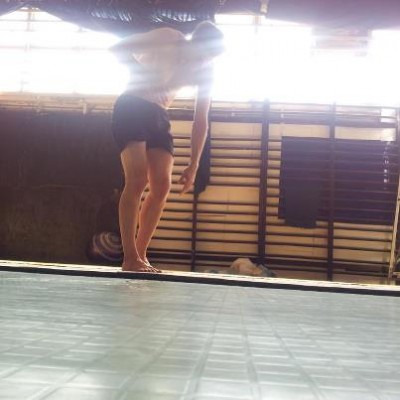 Rehearsals with Stéphane in Melbourne started the day after Pete left for London. I mention this because it’s unusual in our relationship that I am the one who stays behind. I’m usually the one who heads off to the airport, leaving him at home and that means I’m protected from feeling his absence, as I go to places which don’t have his imprint. But we came to Melbourne together, for Christmas and New Year and so I felt Pete’s absence as I started work. I knew that feeling as I said good-bye to Pete at the airport and I recognised its impact when the opportunity emerged for me to stay at the Drill Hall, the Snuffpuppets’ space where I am rehearsing with Stéphane. I am used to being on my own in these kind of work/live residency spaces but this time, I was reluctant to be lonely. I knew I was perfectly capable of managing on my own (practically but also emotionally) but I wondered did I need to be on my own? Might I prefer to not be alone? The only doubt about forgoing solitude was in the recognition that much of my creativity, or at least the spark of my own particular creation, comes from the time I spend alone (the time I spent alone in the fields and woods and streams around our childhood home in Ring, the time I’ve spent in studios, abandoned warehouses, empty wasteground, alone). But with Cure, I’ve set in motion a process that ensures that I am not on my own and opened the possibility of a creative source that isn’t fueled by solitariness. 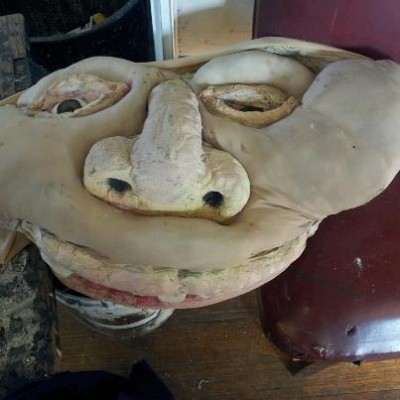 Being in the Snuffpuppets space in Melbourne is an antidote to loneliness, not only because I am accompanied by Stéphane there but because the Drill Hall which is Snuffpuppets’ home is a space full of an energy that comes from people working together. Andy Freer, Snuffpuppets’ Artistic Director, is clearly the guiding spirit but the company grows out of a collective and involves teams of people working together to imagine, build and animate the anarchic giant puppets that also place themselves in performance in the middle of large crowds of people. Stéphane and Andy just returned from a community project in the slums of India and brought with them more of that energy of crowds and chaos. It’s not my native energy but it does me good to be warmed by its frictive heat. 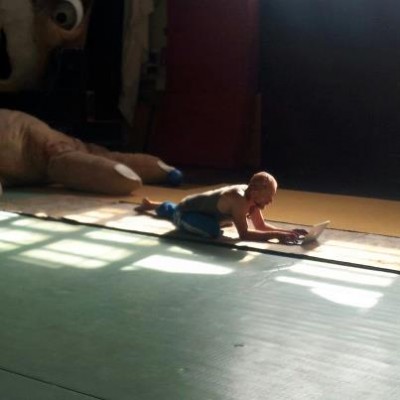 So I work with Stéphane in the Drill Hall that is filled with ideas, industry, imagination and our labour is literally watched by a single giant eye from the company’s last show Everybody. The Dionysian energy of fun and transgression that is a hallmark of Snuffpuppets is an energy that Stéphane has often brought to my work. His ‘fox’ material for Niche came from his connecting with the feral energy of those wild animals in urban spaces. This time he has drawn some of that energy out of me. And though I practice the calmness of Tai Chi, I know that the wildness of effort energises me too. In my middle age, I am not ready to yield entirely to withdrawn contemplation.

When I think about Cure, it’s important to recognise the place of strong energy, of roughness, of effort in a process of recovery. It’s not all about breathing deeply and fading away into meditation. Something about that turbulent Dionysian energy makes me feel alive even if I am not one to live too long in chaos. Perhaps what I enjoy is surviving the chaos, making it through to calmness and for that reason I need the disturbance so that I can experience the pleasure of rediscovering equilibrium. If I were always in equilibrium, I’d get bored – and worse: I’d wonder if I were alive. So recovery for me is about recognising my appetite for and investment in the challenge. Without challenge, I don’t know that I’ve survived.