Dance/Body at the Crossroads of Culture

Below is the text of a presentation I made for a conference in Cyprus called Dance/Body at the Crossroads of Culture. I found my time in the divided city of Nicosia fascinating, not least because of the fact that I was staying in a house on the greenline between Greek and Turkish Cyprus (I’m aware that choosing the words to describe the division is politically loaded. Greek Cypriots call the Turkish part the “Other side”). 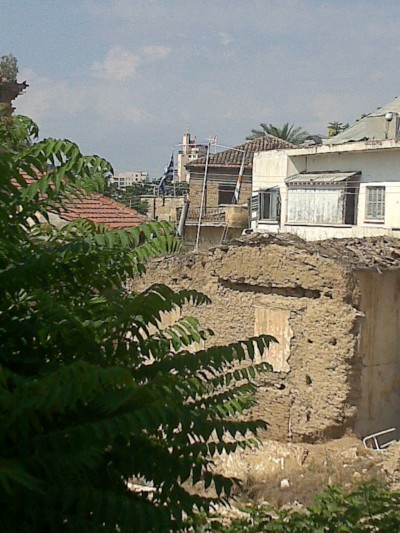 There was a checkpoint right outside my gate. And so the conference was addressing issues of particular local significance:

I’m not performing this morning or at least not dancing and the reason for that is that I injured my knee dancing at the cross roads of cultures: I have been working in China since 2006, performing my own work and creating new work with Chinese collaborators. Working in that context is a challenge. While I speak some Mandarin, I am not fluent and besides there is always as much to grasp in what is not said in China as there is in what is spoken. Last year my collaborators and I were invited to perform work in the Irish Pavilion at the Shanghai World Expo. That was challenging for my Chinese friends as the Expo was really a propaganda effort on the part of the Chinese government and my friends were not comfortable being part of that effort. I felt bad to have implicated them even though we all did it because performing there allowed us time to work together in China, improving the work and sharing it with other Chinese audiences outside the Expo context. I also felt bad because my Chinese friends were not always made welcome inside the Irish Pavilion. This wasn’t the fault of the staff but another group of Irish dancers who were performing there were exercised by the fact that what they assumed were unauthorised Chinese people were sharing their green room and went to report the incursion to the Pavilion organisers. It was a mistake but not one born of a generous spirit. And finally the Pavilion itself wasn’t physically ready for our performance, offering a small wooden stage for our dance that wasn’t at all suitable. As a result, I danced on concrete and on treacherously sharp plastic for my time there. I wanted to do a good job, to fulfil my obligations, to show my work in this unusual setting. In our second last day of performing, (it’s typical that we survive until the last moment in these extreme conditions) I injured my knee badly and am now recovering from surgery.
So that’s why I’m not dancing for you today.

What I take from that is that dancing at the cross roads of culture has a cost. It is something very valuable to me, an opportunity to learn but like all valuable things it costs.

As I am not dancing, I will show you today two dance films which I made for RTÉ, the national TV station in Ireland. I want to use them to illustrate the forces that have shaped this Irish body.

The first film is Match, made in 2006. It’s a duet set in Croke Park, Ireland’s most important football pitch and one of the finest stadia in Europe. Croke Park is the home of Ireland’s national sports and unlike soccer whose elite players are paid so well that their lifestyles don’t connect with those of most of their fans, in Ireland the national sports are amateur games even at the highest level. The stars of the game are teachers, policemen, and farmers, so their lives and those of their supporters are shared in the same communities. So Croke Park is both a special place but also one that everyone can feel connected to.

Croke Park is also important because it is inextricably linked to Irish national and particularly nationalist identity. In 1920, the British Army shot spectators and a player at a match there, in retaliation for the killing of Army intelligence officers by the IRA. Because it has been a traumatic site in the fight for Irish independence, it was a big deal when the Queen was invited to visit Croke Park during her visit to Ireland last month, though the way had been paved somewhat by the historic playing of God Save the Queen before an England Ireland rugby match that took place in Croke Park a few years ago when Ireland’s main rugby stadium was being refurbished.
So Croke Park is a familiar and culturally resonant location and I put two men on its pitch.

Before talking a little more about Match, I wanted to mention that crossroads used to be an important place for dancing in rural Ireland. Crossroads were where people would gather and I imagine in those places for socialising, they were the places where prospective marriage partners would meet. The crossroads were then a place where DNA could cross creating the possibilities of a new generation. What’s interesting for me in thinking about crossroads in terms of DNA is that the new possibilities that come with DNA crossing aren’t only about introducing new genetic material. The crossing also allows what was latent or recessive in the code to express itself and become visible.

This notion of allowing the latent to become visible, to create new possibilities by connecting with existing or historical structures is something that animates Match. The people who watch football and hurling are experts at watching articulate physicality that is emotionally and psychologically driven and has social meaning. By putting my dance on that familiar turf, I wanted those people to realise that they already had the knowledge to read it. In doing so I wanted to make my unfamiliar artform familiar, inserting it in part of the national narrative, and I also wanted to make that familiar place a little strange. It is gratifying for me that a number of people who’ve seen the film say that they still think of it when they go to Croke Park now.

This connection with but reworking of heritage is something I experience personally since my family are sports fanatics: my mother, uncles, brothers, sisters all play sport and follow it avidly. One brother is a sports journalist, another a sports physio and my sister has run a ladies’ football club. My body was made for sport but rather than playing sport I’ve taken that ability and used it in a different way. I acknowledge the connection to that heritage but express its capacity in a different form.

This is particularly important in thinking about how my physicality has been shaped. We don’t have professional dance training in Ireland so it is sport rather than dance that has give me an appetite for muscular physicality, full of momentum and unafraid of effort and sweat in achieving its goals.

The other main force that has shaped my physicality and in particular my choreographic sensibility is the Catholic Church. Last year I made another dance film for television and I wanted to address the impact of the church on my body. Irish people are much less observant than they were, however the fact that the Church has less sway over people’s consciousness doesn’t mean that it doesn’t impact on our culture’s subconscious. I was also aware that in the wake of the clerical abuse scandals that much had been said but that the trauma visited on those young bodies had not been addressed through the body. The dance is not about that abuse but no work that addresses the church and the body in Ireland can avoid the implications of that trauma.

Since making Mo Mhórchoir Féin, I have continued the investigation of the impact of the Catholic Church on the Irish body in a new work for the theatre called Tabernacle. I’ve made the work on five dancers, four of whom have some experience of Catholicism but none of whom are Irish: a South African living in London, an Italian living in Ireland, a Basque man living in Berlin, a Frenchman living in Australia and an Australian living between London, New York and Berlin. Given how Ireland’s DNA has been altered by the immigration of the 90s so that the Irish body is now something much more than it was 50 years ago, it seems entirely appropriate that an idea that started in my experience should now be carried, amplified and transformed by the bodies and experiences of these talented international performers.

I had feared, following my knee injury, that I might not perform again myself and that this process of passing my material over to these dancers was a way of dispersing my dancing self forever. However, this enforced pause has revealed how much I want to perform and fortunately my knee is recovering so it should be possible. It is likely to be a different kind of performing in the future so this Irish body is still a work in progress, still being made by experiences such as this conference where meeting at the crossroads of cultures teaches me new things that I hope I can continue to process in my work.