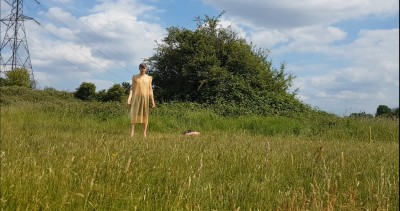 One of the things I’ve realised in lockdown is that, for the most part, I’ve separated my creative work from my domestic life.  Our home is a haven where I may do admin, squeeze a dance class into the space available and roll out a yoga mat, but it’s not really the place for making work.  So I’ve done my DownDog yoga, my Cunningham classes online with the teachers in New York and my Freeletics fitness training during lockdown, but I haven’t found it so easy to connect to a sustaining creative impulse.  I think it’s been deliberate that I’ve maintained a separation between home and that work over the years and I’m very mindful of how the imperative to connect online has forced many people to share their private spaces for work – whether it’s in lockdown performances or professional meetings.

I’ve felt it a kind of pressure to find what the next creative impulse would be.  Despite knowing that this should be a time for listening, for slowing down, a time where for me the lockdown corresponds with a period of post-NDCWales reflection and recovery, I’ve nonetheless been asking myself who I am if I’m not somewhere in a process of making work.  Having a chance to reflect on that in a talk I put together for the Modes of Capture Symposium helped me take some of the pressure off as I recognised that I had a body of work to build on rather than a blank canvas that needed to be filled in.

So when John Scott invited me to present a performance in his Dancer from the Dance Festival this year, I did have somewhere to go.  I’d spoken about Cure in the talk for the Modes of Capture symposium, as a work, though apparently solo, that was made through the support and care of others, a work of recovery that felt apposite today in personal and global terms.  I thought in particular about the final section of Cure, choreographed by Sarah Browne, which was developed from a latex sculpture she created.  The sheet of rubber was built up by repeated careful layering of liquid latex on a section of Sarah’s studio flooring.  It carried the distinctive markings of that floor like a fingerprint and I remember dancing with the sheet – a welcoming skin and a prophylactic barrier – and feeling like I was dancing with the physical work and focus it took for Sarah to make the sculpture.  I decided that I would return to this section for the Dance from the Dance performance and it was immediately energising to be back in creative conversation with Sarah.  It was energising to recognise that the work in Cure still had resonance, and that there are resources in what I’ve done already that will help me figure out what I should be doing now. 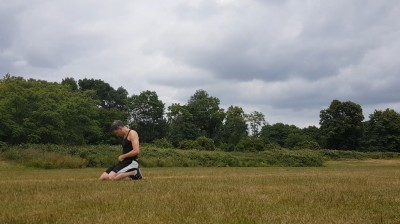 The fact that I had two iterations of Sarah’s sculpture with me at home in London made this process possible.  The latex sheet is a dance partner, with a physicality and capacity that feeds what’s possible in the choreography.  In Cure, I would make an incision in the sheet at the end of each performance (one carefully marked out by Mags Corscadden, the stage manager) and then wear the sculpture over me.  I’d kept the one from our last performance (in Hong Kong) and had an additional uncut sheet.  As soon as I opened the bag in which I kept them, I remembered and felt the atmosphere the latex created – the smell of rubber and talc, the soft touch, the taste of salt from Stéphane’s section of Cure now mixed with my sweat on that sheet previously used in performance.  For this performance, I was reluctant to cut the only remaining complete sheet of latex, so I worked with the cut version instead, suturing the cut with sellotape that made it like a scar. 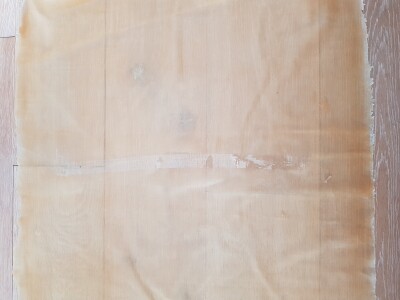 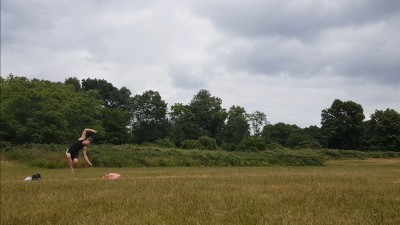 Talking to Sarah by Skype, it was interesting to think about what this rubber sculpture communicated in the era of PPE.  We’d thought about HIV and the protective barrier of latex in intimacy already when we were making Cure.  In addition to those abiding health and medical resonances, Sarah’s recent work on fitness and bodily training, Public feeling,  came to the fore as I connected my work on Latex (2020) to the fitness training I’ve been doing in lockdown – an AI-mediated fitness app called Freeletics – and to the many others doing their fitness training around me on the cricket pitch near my home where I ended up filming the performance.  I filmed different versions over a couple of weeks, figuring out what to wear, what framing seemed right, what different weather conditions communicated.  The version we chose for the performance in Dancer from the Dance is filmed on a sunny day with a lot of bird song and planes flying overhead.  It’s Walthamstow in East London so not the rural Ireland I’ve seen in some of the work commissioned for the Modes of Capture symposium.  I was a little envious of the space and privacy rural living might afford those performances and was very aware on this cricket pitch in London that I was claiming public space for my less usual activity.  Part of the work of the performance was making that claim, mustering the courage to be visibly performing my physicality where others were doing theirs. 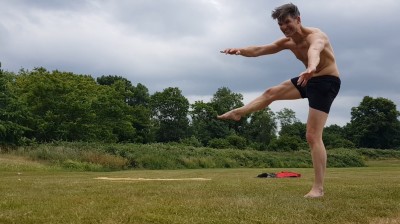 Alma Kelliher who composed and designed the sound for Cure, reworked her design for Latex (2020) keeping the ambient sound of the recording to acknowledge the circumstances in which it was performed and filmed.  I’m very happy with the outcome – in the filmed performance that will be shared online through John Scott’s festival but also in my body and mind that have been re-energised by the chance to work on this choreography and with Sarah and Alma.  This, I hope, is the way to move forward. 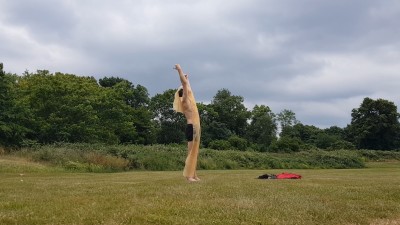