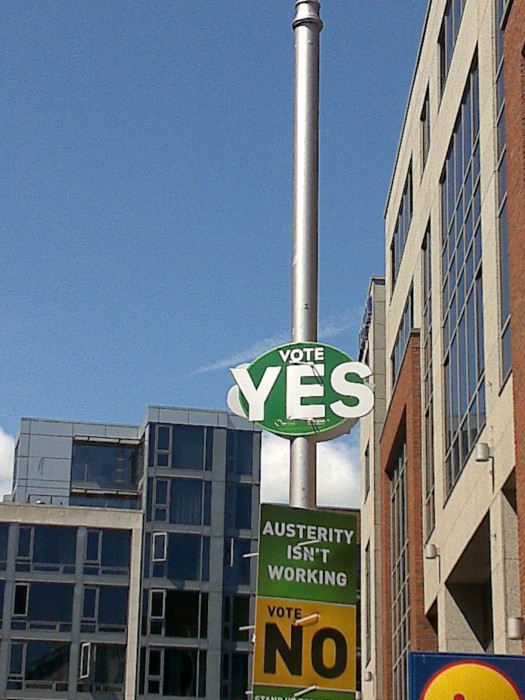 While we’ve been working in Dublin, Ireland has voted somewhat half-heartedly in a referendum to accept the EU fiscal treaty. As Fintan O’Toole explained in the Irish Times

The Yes campaign had effectively stopped trying to argue that the treaty, as a response to the euro zone crisis, had any intrinsic merits. The only real issue was, as one voter quoted in a vox pop put it so succinctly, “I am going to vote Yes because we need the money and I don’t see us getting it anywhere else”. This is the surreal state we’re in: people voted Yes not in spite of their belief that Government is bullshitting when it says a second bailout is ludicrous but because they believe it is bullshitting.

This is not “a loud expression of confidence in the Irish economy”, it is a loud expression of the belief that the Irish economy is likely to be on life-support for at least the rest of the decade. It is not “another reminder that Ireland is dealing effectively with its problems”, but an expression of grim fatalism. People, by and large, do not believe the policy of austerity for the poor and lavishness for dead banks (what should we call it – banksterity? austravagence?) is leading either to economic growth or to a restoration of sovereignty.
And there is a clear reason for this: people are not eejits. They know that the EU expects Gross National Income to decline by a further 1.3 per cent this year, with private and public consumption continuing to fall. They can read the figures that show that long-term unemployment (the really toxic kind) increased by 7 per cent in the last year.
They know that only large-scale emigration is keeping youth unemployment from reaching catastrophic levels. They know that the domestic economy, on which the vast majority of Irish employees depend for their jobs, is still shrinking. They know the Government is still committed to burning almost as much money every year on promissory notes for Anglo Irish Bank and Irish Nationwide as it is taking out of the economy in cuts and extra taxes. They know that the political and governance systems that created this mess remain largely unreformed. If this is evidence “Ireland is dealing effectively with its problems”, it is difficult to imagine what ineffective policies might look like.

This delusional talking-up of the state of the country wouldn’t matter so much if we could put a cordon of silence around the island. But what are our European partners to make of our pleas for help when we keep saying “ah but sure we’re doing grand really”? Or is it that the Government feels there’s no danger because it knows that no one believes what it says anyway? 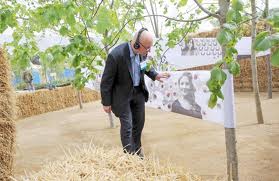 There’s also been the annual Bloom garden festival interestingly subverted or at least complicated by landscape architects Luke Byrne and Cillian McDonald whose ‘show garden’ called Departures was an artistic installation using straw, audio recordings, a reclaimed floor and some lime trees to address the experiences of contemporary Irish emigrants. Thanks to Luke Pell’s connections in Dublin, he met the landscape architects and invited them to come to talk to us. Discovering that they both have written theses on disused space and buildings in Dublin made them particularly interesting for me. A connection with potential…

Meanwhile, this week the Eucharistic Congress has started in Dublin with Catholics from all over the world arriving in the city to the news that

that just 38 per cent believe Ireland today would be in worse shape without its dominant church. And just three-fifths even knew the Eucharistic Congress was coming to Ireland.’

The last time Ireland hosted the Eucharistic Congress in 1932, more than one million – a quarter of Ireland’s population – packed Dublin’s Phoenix Park for Mass with not a dissenting voice.

This time, Ireland’s opening soccer match on Sunday in the European Championship has dominated public attention and excitement. So much so that the congress blog had to point out to visitors that all the Irish flags on display on buildings, shops and taxis represented excitement about the football, not the faith.

As I write this blog that Euro 2012 excitement that we see all over Dublin in the fiesta of tricolours decorating houses and shops has waned in the wake of Ireland’s defeat by Croatia in the opening match of the campaign.

Massacres continue in Syria but I think people are more sensitive to the conditions of Spain’s EU bailout.

All this goes on around us. It’s woven in the city. It shapes how people feel what they hope for and what they fear. It can’t be forgotten in attending to E-motional Bodies in Dublin.