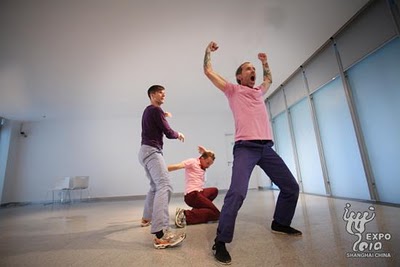 Because Matthew was coming to do Match with me, and since Stéphane was already in Shanghai with his Australian partner, I offered Culture Ireland and the Pavilion that we could do some of the Niche material as an additional performance. Of course it wouldn’t really be Niche without Mikel and Bernadette but I hoped the material would survive its being juxtaposed with the strange Expo environment.

As an acknowledgment of Expo’s superficial glamour, I decided we should recostume the piece in something more colourful than our usual sombre work-gear. Uniqlo provided the candy-coloured clothes that stood out in the cool neutrality of the Pavilion.

I thought a lot about what Niche could mean at Expo. After all, it should make sense there: I started bodies and buildings research in Shanghai in 2007.

Looking back at the material I worked on (some of which was developed for Tattered Outlaws), I can see that I felt then the juxtaposition of Shanghai’s extraordinary urban development with the large scale urban destruction that attended it. The shiny facades are constructed on ruins of other lives.

Xiao Ke’s discomfort at being in EXPO was born of a similar awareness of the ugliness of the controlling authority behind the exuberant One World architectural regalia.

As we prepared to perform Niche in the courtyard of the Irish Pavilion, builders gathered around a misplaced pole, dug up the pristine grass in an action that reminded me of all the labour that has gone in to creating and sustaining the Expo illusion. I was pleased to see this group of men, their nonchalant choreography, their bouts of activity and waiting, all of which reminded me of Niche. It gave me a reason to be showing the work there. 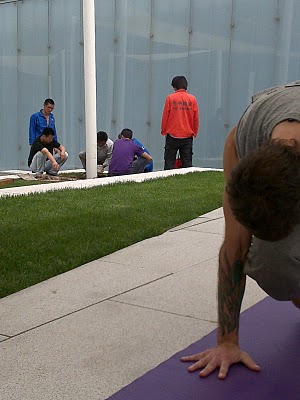 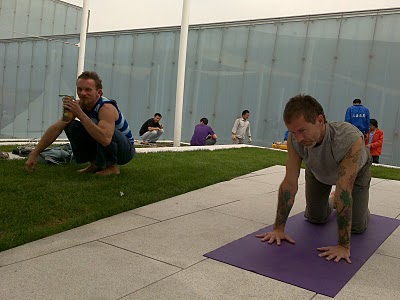 But when we performed for the audience in that space, I doubted again the value of presenting work to a group of people who are primarily collecting stamps in their Expo passports. They really don’t expect to see contemporary dance – mostly because they have no idea what contemporary dance is. They clap at anything that looks like a trick. They come and go as their attention span dictates. It’s pretty humbling and demands that you have your own sources of confidence and validation.

When rain dictated that we move our performance indoors to the marble-floored temporary exhibition space, what we lost in audience numbers (100-150 outside, 60 inside), we gained in focus. The enclosed space meant that people watched our dancing with attention. I know we made an impact on some people, because they came to talk about the work, to thank us and to have our photograph taken.

Our photograph made the front page of the Expo website and several newspapers. 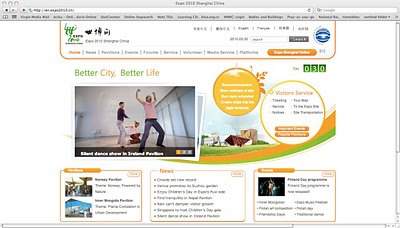 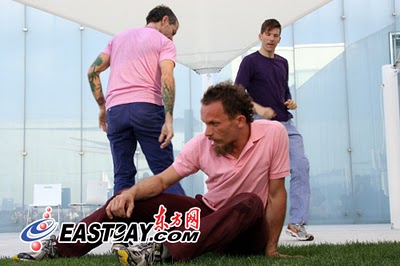 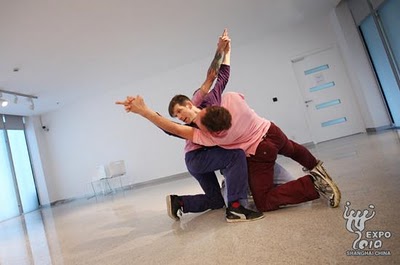 The fact that we used no music seemed to be the most noteworthy aspect of our performance. The media coverage felt like an achievement, a recognition of our work that could so easily have been lost in the din of competing national day pageants. What did we communicate? That Ireland is willing to support the individual artist, to foster innovation and experimentation, to allow talent to be expressed in unconventional ways? I’d like to think so.