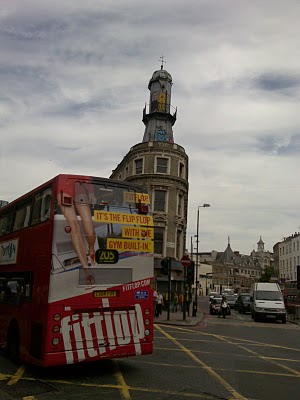 I’ve just finished a project with five second year BA students at London Contemporary Dance School. I’ve been encouraging/facilitating/mentoring them to think about context when they are developing their choreography. In particular, I’ve focused their attention on Kings Cross, where the school is based, and which is the biggest city centre regeneration project in Europe at the moment.

Mostly they had no idea of how the area is being transformed.

I decided to do this project, called Kings Cross solos, after attending Choreoforum last year. At that annual conference for choreographers, the recipients of the Raine Fellowships spoke about their experiences spending time in other contexts (for example Rosie Kay spent time with an army regiment and Kate Flatt in hospices for the terminally ill). They were inspiring but I was uncomfortable that the audience was so amazed that choreographers might have a relationship with these other contexts, might have something to learn from and something to contribute to them. It bothered me that people would think it took the magic of a Raine Fellowship for such a connection to be made.

But then I realised that students of dance focus on quite a narrow set of career options that usually involve performing or making work for theatre. It’s not that they don’t have other experiences of the world outside of dance training but they don’t have a specific opportunity for allowing those other experiences to relate to their dance practice. In that respect, my late coming to dance meant that I began my career with a sense of other worlds, other ways of thinking, other sets of priorities.

The narrow focus of much dance training in no way corresponds to the diversity of opportunities and practices that exist for contemporary dance artists. So I decided to pitch an idea for a context-conscious project to LCDS and Kirsty Alexander, Deputy Director of the school, was very welcoming of such an approach.

The project was an interesting challenge for me since I wanted to share some of my amassed knowledge and the approaches I’ve developed from this bodies and buildings research but I didn’t want to choreograph on the students. Instead I wanted to encourage these young artists to develop their own voices, but to do so by answering in their own way questions about context that I posed them.

One of the things that I clarified for myself is that my work isn’t so much site-specific as it is an encounter between individual and site. That encounter is an I-thou relationship that acknowledges the integrity of both parties in the meeting.

I introduced the students to Gill Henderson of CreateKX, an organisation that brings together the cultural organisations of the Kings Cross area (The Place, British Library, Wellcome Trust…) to work to for cultural provision within the area’s redevelopment. I also invited the journalist and social historian Alan Dein to tell the students some of the human stories that he’s gathered in the area. His audio tour of the Caledonian Road is available here.

The contextual information was initially overwhelming and I was struck that some of them felt a guilt or responsibility to embody the stories they heard. But I didn’t expect them to channel Kings Cross. We had six days for the project and besides there are an infinite number of stories you could tell about this or any area, an infinite number of contexts one could address. In fact one of the most interesting things to ask oneself when working in context is ‘who defines this context?’.

Faced with that infinity, I felt the only choice was for the students to clarify their own expressive voices and to place themselves and their investigations in that wider context, allowing themselves to be informed by and to contribute to that developing context. The work then develops from the encounter, an encounter that may illuminate both parties in the meeting.

The work of one of the students, Anja, isn’t shown here because my video of her work was too bad.