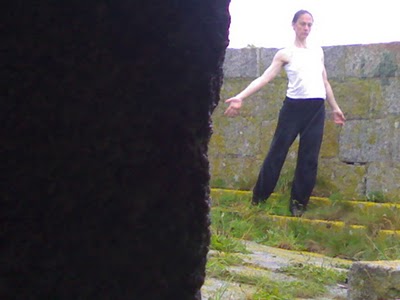 I’ve spent the past four days taking boats, wading through water, tromping through fields and climbing ropes so that I could dance on top of some of the twelve Martello Towers which were built in what is now Fingal, north of Dublin. The adventure is part of a Public art commission by Fingal County Council, for which I am collaborating with multi-disciplinary artist, Dan Dubowitz. We’re hoping to re-establish a tentative connection between the towers which were built to protect against Napoleonic invasion. However the towers never had to defend the coastline and have since been adapted to various uses (museum, private dwelling, store house) or allowed to fall to ruin. Of course, in falling to ruin, the towers have continued to serve various functions – as shelter, as haven for drinkers and lovers, as a place for pigeons to roost and for hardy plants to colonise. Now there somewhere for a physical and imaginative exploration of bodies and this particular set of buildings.

The adventure aspect of this project is fun: I love scaling the towers and negotiating the tricky entry to them. This experience is more than fun though: it’s also a physical experience which colours the movement -material I bring to the top of the towers. If I were butchered there, adrenaline would make my flesh taste different. Dan has set up a rotating camera to capture the activity on top of the tower, or to catch glimpses of the material at least. The constant rotation means that much material is missed from the shot. There is a pathos in the absence and presence.

It’s not just me on the towers: Bernadette Iglich joined us for the adventure, finding a way to feed the challenges of the environment and weather into the life blood of her movement. Her DNA is now imprinted on the towers and it has left its marks on her