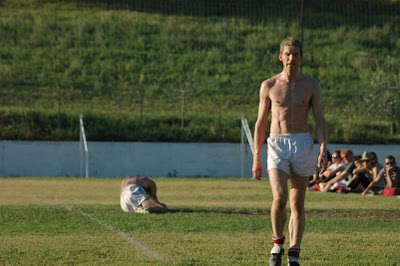 Performing on a soccer pitch in Bassano is kind of stretch of the bodies and buildings concept. However the idea of bringing dance outside of its protective glasshouse to be tested in a public space links the research and manifestation of this project. The performance in Bassano was at the invitation of the Roberto Casarotto who curated the B-Motion Festival as part of the Operaestate Festival in the region. I was excited to participate and to attend because much of the work he has assembled i by independent artists and its reassuring to see the possibilities for such work to reach a wider audience without compromising its idiosyncrasy.

For Matthew and me, the challenge was to deal with the huge space which the football pitch presented. I took the material from the film and extended it from one goal post to the other. Sunshine and the sandy ground made it an effort but that effort is already part of the truth of the material and didn’t need to be denied. Performing in that kind of public space where the work isn’t sealed off from outside influence requires a particularly sturdy kind of piece but it brings with it a potential for beautiful additions: we gained the shouts of elderly gentlemen playing boules and the voices of a gospel choir practising nearby. One cannot rely on these chance additions but one can be grateful for them and for serendipity.

There’s an interview and more photos on the b-motion blog – a great idea that records and deepens the festival experience: 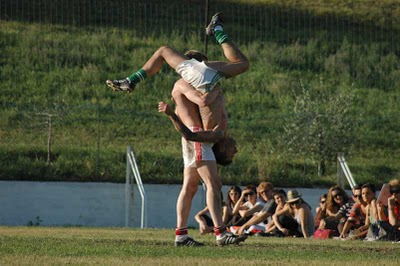