Matthew and I are in Beijing performing Match as part of the Irish Arts Festival here. (Thanks to Culture Ireland and Dublin City Council who paid for us). Our performance was as the hors d’oeuvre to the official opening of an exhibition of Irish visual art. It was held at the Beijing Art Museum of the Imperial City (http://bamoic.info/) in the centre of Beijing. However, eventhough, my work made it from the art periphery of 798 where I performed last year to this political centre (with a very considerate Minister Dick Roche and Ambassador Kelleher in attendance), yet again, it was about fitting the work to the constraints of the environment. This was the first time we performed indoors, so we had a narrow corridor with a tiled floor to contend with. No football boots then.

But the performance went well and it was a good opportunity to show the work, even if I started my performance with a nervous energy heightened from trying to preface the piece with a few well-rehearsed remarks in Irish, English and Chinese. (Eurovision was a formative cultural experience).

One of the elements of the visual arts exhibition was a series of photos by Varvara Shavrova (http://www.varvarashavrova.com/) that links the disappearing hutongs of Beijing to abandoned cottages near Ballycastle in Co.Mayo. I was pleased to find myself near this work that made visible links I sense in my own imagination.

Before we performed we warmed up in one of the gallery spaces that the catering staff was using for its preparations – all the hors d’oeuvres together. 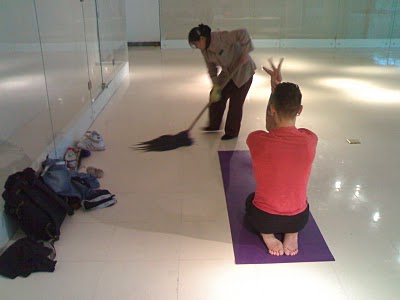