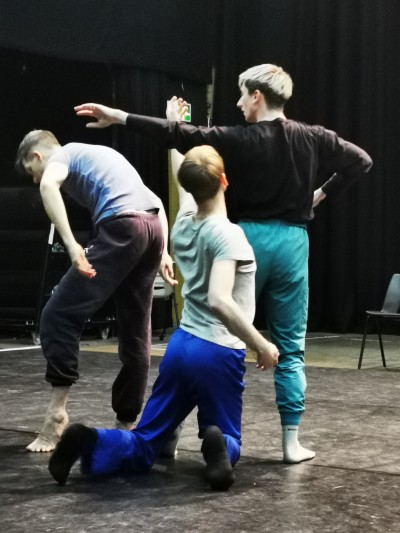 Moving Layers is an R&D project I’m doing for NDCWales with experience-designer Rob Eagle.  It’s a project funded by the Clwstwr programme, a partnership between Cardiff University, University of South Wales and Cardiff Metropolitan University  ‘to create new products, services and experiences for screen’.  The Cardiff partnership is one of the UK government’s Creative Industries Clusters Programmes,

part of the Industrial Strategy Challenge Fund that is being delivered by the Arts and Humanities Research Council on behalf of UK Research and Innovation. This unprecedented research and development programme will keep the UK at the cutting edge globally; creating jobs, developing talent and driving the creation of products and experiences that can be marketed around the world, significantly contributing to UK economic growth, both nationally and regionally. (Clwstwr)

It’s good to note the economic imperative that’s driving this opportunity but at this stage, what Clwstwr has provided us with is a valuable opportunity to do some very initial research on how Augmented Reality and dance might work to produce new kinds of dance experience and new ways of experiencing it.  National Dance Company Wales has proposed that we:

will prototype an experience that enables a diversity of people to witness and participate in dance stories that change the audience/performer relationship and that connect people to their own physicality. This project will explore knowledge-exchange between choreographers, academics, mixed reality designers and programmers to build a basic demonstrator that addresses a longer-term ambition to connect to audiences outside the traditional touring model and develop vital new markets for dance. (Clwstwr)

The reference to connecting people to their own physicality was particularly important for me since my experience of Virtual Reality experiences was that they drew people away from their physicality (sometimes, as in the case of pain relief VR experiences, for beneficial reasons).  But what we in dance have an expertise in, is in liveness.  Even when working with Dearbhla Walsh on dance films, it’s always been a digital mediation that connects people to the visceral sensuality of movement in others and in themselves that’s been a goal.  With Augmented Reality, it feels that there is more opportunity to main that connection with the organic while adding the extra possibilities of the virtual. 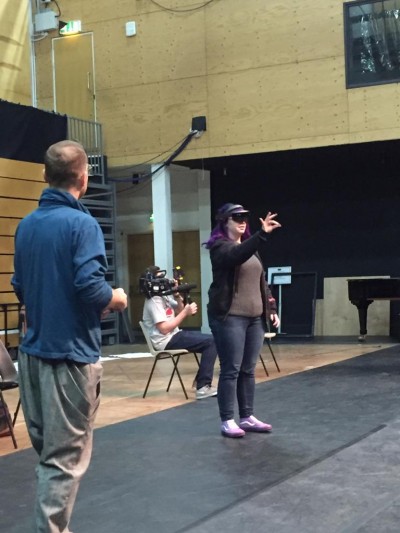 I came across Rob Eagle’s work through Twitter.  I noticed that he was developing AR experiences with a queer edge: his Through the Wardrobe project invites people to inhabit gender fluid and gender non-binary experiences.  I was also aware of his documentary work on identity in gay fetish communities and the intersection of the queer and the technology attracted me.  For NDCWales, working with Rob could be at once an opportunity to innovate in formats of dance creation and presentation and it could also bring gender diversity and sexuality into greater focus in the Company’s creative work.

Given it was a new relationship, Rob and I spent some time discussing how we would start and what would be a point of common departure for our first week of R&D in the studio.  We were interested in a notion of fluidity and liquidity, something that linked the distinctive quality of dance that can keep ideas, experiences and consequently identity in motion,  and the potential of an augmented reality to transform experience.  In that idea of fluidity, for me was also a sense of the queer as a verb – an action of deviation, of motion – rather than a noun – a label and fixed identity.  From the discussion about fluidity and fluids emerged a an acknowledgment that for a gay man of my generation, fluid was something to be protected against.  It related to desire and also death.  For a younger generation, that might no longer be the case, but we realised that  the language of seduction, desire and danger connected our bodies and the technology. 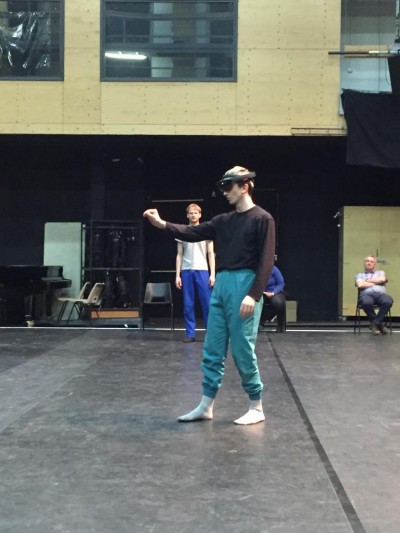 My research in preparation for the first week of studio time with Rob and with dance-artists Meilir Ioan and Rob Bridger, took me from the Taoist understanding of water (the element of winter, of inward reflection, of multiple forms that imbalanced could mean vacillation and indecision), to the Welsh Ceffyl Dwr – the mythological water horse that sometimes draws unsuspecting riders to their doom (something in the solid corporeality and power of a horse also transformed into water still resonates) and a reading of Greek water-related creatures that brought me to the Pre-Raphaelite painting of Hylas and the nymphs. 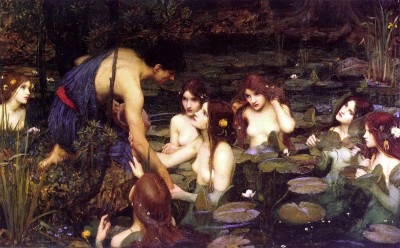 The painting,  by John William Waterhouse, depicts Hylas, the lover and companion of Hercules, who has gone to fetch water on a stop off during the voyage of the Argonauts.  Hylas was so beautiful that the nymphs of the pool wanted him and seduced him into the pool where he was trapped/elevated in immortality.  Hercules was distraught when he didn’t return and called for him.  He only heard the words Hylas, Hylas, Hylas  come back to him. 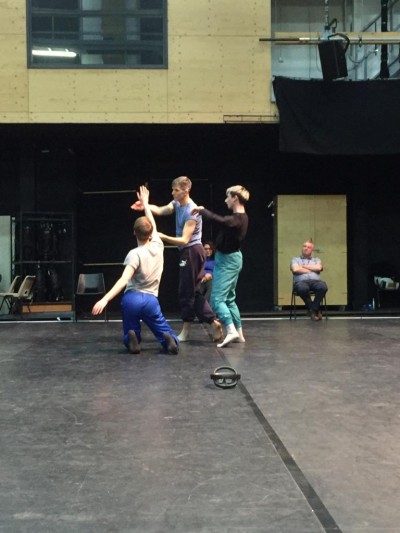 The story is one of seduction, desire, immersion, danger, loss and suspension (in time).  As with most stories of desire it is one of repetition (Hylas, Hylas, Hylas).  Hercules loses Hylas but gains him because he has murdered Hylas’ father.

The painting suspends the moment of seduction just before the immersion.  Apparently, Waterhouse used two models for the seven nymphs so there’s repetition there too.  The painting gained notoriety recently when it was taken from permanent display at the Manchester Art Gallery as part of an intervention by Sonia Boyce: ‘The act of taking down this painting was part of a group gallery takeover that took place during the evening of 26 January 2018. People from the gallery team and people associated with the gallery took part. The takeover was filmed and is part of an exhibition by Sonia Boyce, 23 March to 2 September 2018′.  The intervention aimed to challenge the ‘Victorian fantasy’ of the female body as either a ‘passive decorative form’ or a ‘femme fatale’. (MAG)

It was reinstated after public outcry at what was regarded as censorship and perhaps a misreading of what could also be regarded as a depiction of active female desire rather than simply the presentation of passive female nudity.

I don’t feel the need to resolve all of these tensions in the painting, in its inspiration, genesis and reception.   It’s still a useful focus for teasing out the appeal and dangers of engaging with virtual reality and bodily desire.  And as Manchester Art Gallery acknowledged after their experiment: ‘the painting has been a barometer of public taste since it was painted in 1896 and continues to be so.’ (MAG) The notion of the pool as the place of immersion provided us with a spatial reference for the choreography.  And if at moments, Rob and Mei and I imagined ourselves seducing the beautiful young man, this queering of the apparently heterosexual image (already queer in fact given Hercules and Hylas’ intimacy) allowed it to be a useful resource.  Adrian Rifkin’s response to the Manchester Art Gallery removal acknowledges the latent queerness of the work: ‘ as a young gay man growing up in 50s and 60s Manchester – and queer art historian to-be – Hylas was one of my lifelines to an imaginary world of desire found in images of men.’

Forty years after Laura Mulvey’s critique of the male gaze, which was an attempt to understand pleasure, not to outlaw it, this rather trivial gesture can only be understood as politically shallow. But more than that, as an insult to someone who has lived at a tangent to the heteronormative discourses of which, indeed, it is a fragment. (Rifkin)

Our week involved talking and dancing – and delightfully I got to watch and to dance with Mei and Rob Bridger.  From last year’s Laboratori at NDCWales with Éric Minh Cuong Castaing, I learned that we could think about working with digital technologies that allowed us to see their impact, their ethics and their ideologies.  Inspired by that approach, I wanted us to invite our audience to be immersed at moments, but also to see immersion, to imagine immersion without augmentation and to experience the physical impacts of immersion in others.  These layers of experience, as much as the layers in the experience, seem like valuable ingredients if we are to understand and appreciate the full impact of augmented and immersive realities. 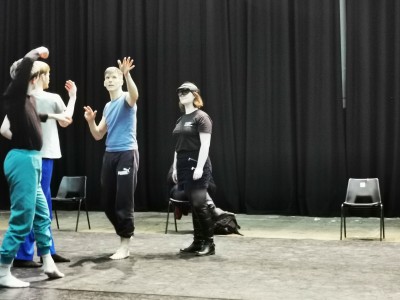 It was clear from the feedback to our sharing that the experience provokes different kinds of desire – a desire to know what the other sees, to be involved, to watch it unfold.  These are not new points of view, as lighting designer Caty Olive pointed out, but what the technology does is augment this familiar experience and give us an opportunity to reflect it and reflect on it.