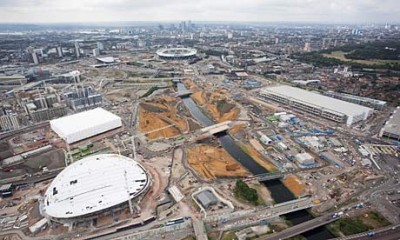 I’ve just had my final interview to try and become Artist in Residence for a year at the offices of the Olympic Delivery Authority in Canary Wharf and on the Olympic site on which the ODA is building.  I don’t really know whether they were looking for a choreographer.  The language of the initial brief which looked for a team of artist and curator didn’t immediately suggest that they were, but, emboldened by the sense that my bodies and buildings experience qualified me to make an informed pitch, I applied with Dominic Campbell as my curator/producer/colleague.

My rationale for the proposed residency is that the Olympic regeneration process is already a huge choreography.  It’s about setting structures in space that determine the movement of individuals through the city now and for generations to come.  My particular interest is in seeing how that macro-choreography is experienced physically, emotionally and psychologically in the bodies of individuals who deliver, receive and ultimately reshape that regeneration choreography.

Dominic’s experience of programming  events across cities and countries can help expand my concern with individuals to a bigger scale – just as the huge spectacle of the Olympics is built on the singular endeavour of individual athletes.

I think the challenge for me in presenting this proposal is that dance occupies a particular place in the Olympic discourse.  It ‘benefits’ from being close enough to sport for its physicality to be acknowledged.  It is useful as a tool for mass participation.  It fits into the grand spectacle of the open ceremony. It gets people sweating.

But people who push dance in that direction forget in their hunger to be recognised by the Olympic discourse that dance is a form of expression and that it can provide a different prism for reading the psychological and emotional journeys that individual athletes express in their physical performances on the track and field.  When athletes race they reveal deep narratives about themselves, the commitments  and sacrifices they’ve made to bring themselves to readiness for competition, their hunger to win and the appetite for life that might represent.  That’s the kind of dance I’m interested in.

Here’s hoping the ODA panel are excited by the idea of helping me make that happen.