Only you: Teatr magazine 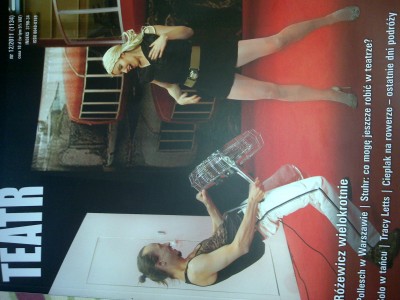 After my residency in Poznan last year, I was invited to write an article for the Polish journal Teatr. I’ve just received a copy: 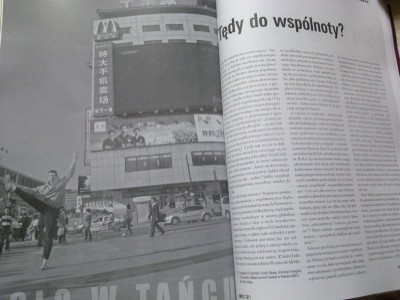 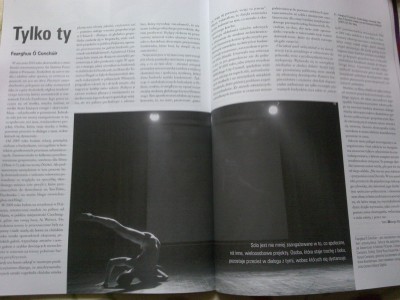 Last January, as part of a research opportunity at The Arts Foundation in Poznan, I found myself alone in the studio and realised that creative solitude was familiar to me. The sense of being on my own in a space was reinforced by the fact that I could hear upstairs the thirty dancers who were participating in a workshop by David Zambrano. His dance work starts in the middle of people, a large fiesta of wheeling energy and activity; mine starts with an individual in a space. However, I’d suggest that the solo is no less an engagement with the social than is more populated work. That individual who sets him or herself a little apart remains in dialogue with those from whom s/he is at a distance.

Since 2005, I’ve been researching work about the relationship between bodies and buildings, particularly in the context of rapid urban change. This research has resulted in a number of group performances, some for film (Three+1) and some for the stage (Niche), but the primary tool in that process has been my own solo experiences of site specific dance that I’ve created for online distribution on Youtube, facebook and my blog.

In 2009, I did a residency in Feijiacun, an artists’ village north of Beijing (not far from Caochangdi, the village where Ai WeiWei has his base). The area had been given to agriculture and small villages but the boom in the Chinese art market created an expansion of Beijing’s gallery scene, pushing artists and newer galleries from the increasingly expensive downtown property to this less central territory.
By 2009, however that boom had stalled, partly because the international market was already saturated by Chinese visual art of variable quality, partly because the global economy was in trouble despite China’s ongoing development. The impact of this art market crash was that a number of big building projects near Feijiacun had stalled. Huge buildings that had been destined to become art galleries remained unfinished. And because China has so much land it is careless about this unused space and allows it to be empty and fallow. So, building on a strategy I had already employed on building sites in Dublin’s Docklands, on Martello Towers in Fingal and in former fascist holiday camps in Northern Italy, I would sneak in to these buildings and record short solo dances there. The dances were always fired by a delight at being able to appropriate that kind of magnificent space for my work but also fuelled by an adrenaline born of the knowledge that I had no official permission to be there. The resulting rough video material, shows a solo dancer in a gloriously large borrowed environment that tempts one to focus on solitude. But for me the importance of this solo intervention is the relationship between the dancer and the space and by implication the relationship between the dancer/citizen and the larger economic and social structure that the building makes concrete. When I danced in these unfinished buildings in Beijing, I felt like I could insert myself in the narrative structure of the global financial crisis, as it was manifest there. In doing so, I asserted that I’d survived so far: “Look I can move, I’m still here”. More than that, I demonstrated that creativity could continue, indeed build on the leftovers of that economic crash.

When I started this strategy of solo dances conceived in relation to architectural structures and to the financial, social and political conditions upon which those buildings are constructed, it was in a confident Ireland that believed its myth of economic invincibility. In 2007, as Artist in Residence for Dublin City Council, I spent a lot of time dancing on the street corners, building sites and waste ground of the city’s Docklands that was then undergoing massive redevelopment from old working class inner-city dereliction to aspirational aluminium and glass apartment blocks and office spaces for the much international financial service industry. When I would dance then, I felt that I wanted my body to gather and express the life and experience that this new development was obliterating.

I also wanted to stake a claim in this new version city living for individual, idiosyncratic self-expression. This seemed particularly necessary as parts of the Docklands that had once been public space were now becoming the property of developers whose security cameras and guards defined acceptable behaviour not only in their buildings but in the ‘open’ spaces around them.

When I made the videos in 2007, there was a sadness of something lost in the solo dancer’s confrontation with the architecture that grows around him. But when I look at them now, that context is changed radically: after the economic crisis in Ireland the redevelopment of the Docklands has come to an uncomfortable halt as reckless lending by the banks, reckless speculation by property developers and poor planning supervision by national and local politicians has been exposed. The videos may capture a moment at the end of the Celtic tiger boom but they also anticipate its demise. The apparently solo dance is clearly a much more complex dialogue between dancing body and shifting socio-political and economic context. When the latter changes, the dance does too, even though the body’s choreography, fixed by the recording on my mobile phone, remains unaltered.

Solos cannot be a retreat from engagement. Even the gesture of flight to the margin has no meaning except in relation to a central place to which the margin is irrevocably related, helping to define that central space even if it moves away from it.
‘Il n’ya pas de hors texte’, Derrida reminds us and in doing so makes a space for that single dancing human to address his work to the socio-political and economic forces in which his movement is implicated but whose articulation might just be challenged by a new choreography emerging through this solo body.

Note: The videos referred can be viewed in the archives of www.fearghus.net/blog from May 2007 onwards. A exhibition of Fearghus’ video work, Bodies and Buildings, will be exhibited in Rua Red Gallery,Dublin from September 2011.