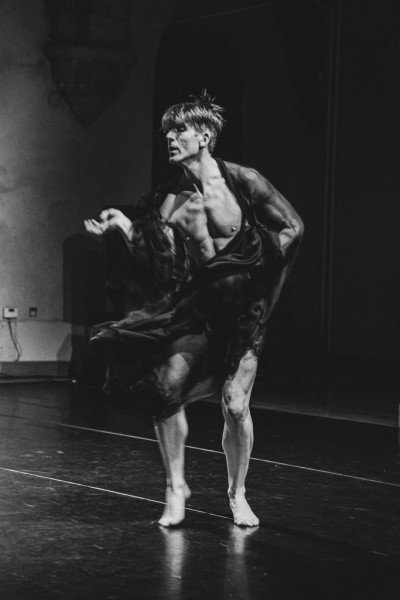 Performing at the Dublin Dance Festival(20/21 May 2022) was an emotional experience fuelled primarily by the strong sense of gratitude for how my dancing body has been enriched by a history of relationships that go to make that place. It’s been two pandemic years since I’ve been in Dublin so there are many people there, friends and colleagues, that I haven’t seen in person for at least that long. And as I stepped into the large, airy space of Studio 4 in Dancehouse and began to warm up, I found myself smiling at the many memories of working there. The last time I danced in the studio was with The Casement Project rehearsals and I could still visualise the line of photos on the back wall. The fact that Matthew Morris is also in Dublin, for the first since 2016, rehearsing with Philip Connaughton (also in the TCP) made that connection particularly live, even if I haven’t seen either of them yet. Imagination of past and future meetings made them palpable. But I felt also around me, in me other resonances: Studio 4 looks out on to a park at the level of mature trees whose foliage swaying in the wind has often been a companion to my dancing there. So too the dogs that run there and who inspired a section in Niche and the seagulls that enhanced a performance of Dialogue with Xiao Ke when we used the skyline as a backdrop for our performance.

And when we came to performing, with familiar faces in an audience visible in the day-lit studio, I could feel myself in a place, as a place made through these energies of influence, experience and support. All of this has a particular relevance for the kind of work I’ve been evolving with Isabella Oberländer. Though we met first when performing Open Niche in Limerick and Isabella performed inside the Niche structure, it wasn’t until 2018 when I was Artist in Residence at the Walthamstow Wetlands that I worked with her directly. The Wetlands residency focused on structures of sanctuary for human and non-human life. Maybe because the NDCWales focus drew me elsewhere in 2018, it wasn’t until 2020, when the pandemic threw me back on my basic resources and impulses that I returned to the Wetlands research and rebound its relevance. I asked Isabella if she would work with me. Fortunately, she had access to a studio in Dance Limerick, within her permitted travel area, and that, plus a shared reference point in the Wetlands, made it possible for us to work together via Zoom. We presented that work (“For Isabella”) in Uilinn, West Cork Arts Centre last year alongside solos I’d made for myself. But we sensed in ourselves and from our audience there an appetite for our two bodies to be together in dancing. We share certain physical traits, even if our pathways through dance have been quite different. To my knowledge, Isabella is relatively unusual in being a queer dance artist in Ireland and our related but different sexual identities give us some shared understanding also. And as our work together has evolved, it is this focus on the structures of queer sanctuary that has invited our attention. I think of queer as a verb in this context, as a movement rather than as a fixed identity. It
“embraces fluidity, resists definitional and conceptual fixity, looks to self and structures as relational accomplishments and takes seriously the need to create more livable, equitable and just ways of living ‘a form that intervenes in social reality through deploying an action that re-creates the agent even as the agent is creating the action’. “ Stacy Holman Jones and Tony E. Adams, ‘Autoethnography as a Queer Method’, in Kath Browne and Catherine J. Nash (eds.), Queer Methods and Methodologies: Intersecting Queer Theories and Social Science Research, (London: Routledge, 2016), pp.195-214
p. 213.

In creating a space for queerness and queering, we are not so much trying to establish fixed borders that have to be protected and defended, so much as spaces of concentrated specific care and attention, spaces that are porous and who gain their quality from the care and attention applied to their creation rather than from their dimensions, locations or history. They are spaces of sanctuary made from relations and therefore open to change but in the moment, no less precise for their potential for change. 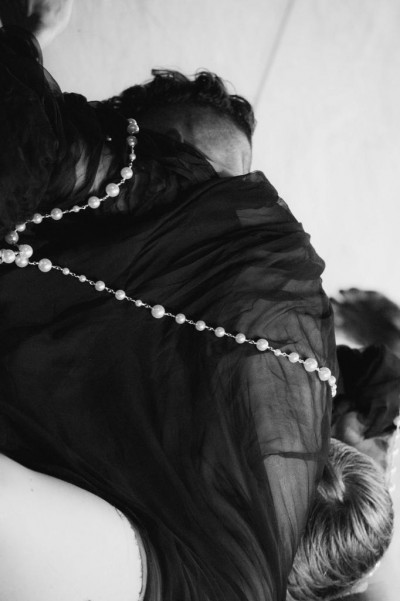 Because the work still carries the vestiges of its inspiration in the Walthamstow Wetlands, we remain open not only to the interdependence of humans, but to an interdependence between human and non-human animals and indeed the material structures that support us. Because we worked with fashion designer Gregor Pituch who made silk tunic like garments for us and gave us long strings of pearls for us to dance with, we were confronted by the restricting and enabling materiality of these prosthetics. These were not costumes to decorate our dancing but contributors to the unfolding of the performance, changing in ways we couldn’t control the appearance of our bodies and possibilities for our movement. 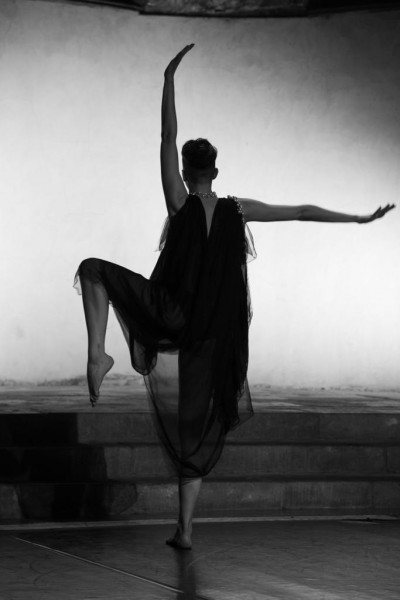 I come away from these performances grateful not only to have been able to perform again in Dublin, with Isabella and for people, including some old friends. I am also grateful that we’ve managed to evolve this work at its own pace, unhurried by and frankly wary of external obligations or demands. Part of the work’s joy comes in the ease of its unfolding – this is not to imply that there hasn’t been work to craft its physicality and sensations. We’ve sustained this development over a long period, mostly unfunded but equally free to attend to what we felt we could sustain and, when the invitations came, viably deliver. Not everyone has that luxury to slip the demands of the market. For this period of time (who knows how long?), we’ve made a sanctuary that is temporal and spatial, social, psychic and affective. It may be a temporary state but it is one I find energising, pleasurable and possibly an inkling of what wiser dancing could be. I know others have found these paths already and I look eagerly for their guidance and the allyship of people like Isabella who already make this quest possible.