Research at the National Archives – The Casement Project 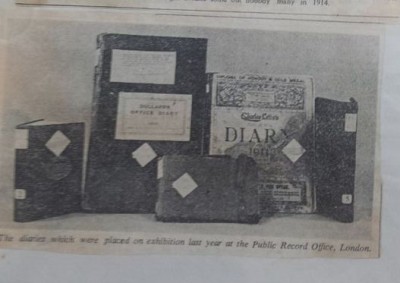 I’ve gotten closer to Casement’s diaries. Having read them first a few years ago in an edition by Roger Sawyer, and more recently in Jeffrey Dudgeon‘s gay-friendly edition, I’ve been approaching them and Casement through archive material in the British Library and in the National Archives in Kew. In Kew, there is the letter from the Dr Percy Mander, the duty prison medical officer at Pentonville Prison who examined Casement’s body after his hanging to probe whether he could have had the sex he wrote about.

I made the examination which was the subject of our conversation at the Home Office on Tuesday, after the conclusion of the inquest today, and found unmistakable evidence of the practices to which it was alleged the prisoner in question had been addicted. The anus was at a glance seen to be dilated and on making a digital examination (rubber gloves) I found that the lower part of the bowel was dilated as far as the fingers could reach.

There’s a letter from Harley Street psychiatrists, R Percy Smith and Maurice Craig who affirm that ‘ in our opinion that the writer [Casement] must be regarded undoubtedly as mentally abnormal individual.’ There are sworn affidavits from hotel staff in Norway where Casement stayed with his valet and lover Adler Christensen that the pair were having sex together.

I hearby declare that Sir Roger Casement was seen by me on Karl Johan’s street, Kristiania [modern Oslo] October 29th 1914 in the company of a well-known “sodomite” from Bergen, the German teacher of languages BAUREMEISTER.
I have also made thorough investigation with regard to Sir Roger Casement’s conduct during his stay in Kristiania . He came there from America together with a Norwegian named Adler Christensen, a native of MOSS. Both men lived for several days in the Grand Hotel in KRISTIANIA where they provided sure proof that they were “sodomites”. This opinion was general among the staff of the Grand Hotel which came into contact with Casement and Christensen.
It is beyond all doubt that it is Sir Roger Casement who has caused Christensen to become a homosexualist and so ruined him, and this is the general opinion among those people who knew Adler Christensen before he made Casement’s acquaintance.
(Signed) H. DEGERUD

Many, many pages of writing have been generated on account of Casement and that’s not inappropriate given what a prolific writer of official and unofficial documents, poems, diaries and reports that he was. I wanted to get closer to the materiality of that writing, to see it as a labour of his body, as vigorous and ambitious as the sex he describes. He wrote late into the night, it takes energy, it develops a particular musculature and physical coordination. I wanted to see the body expressed in his writing.

Casement’s 1903, 1910 and 1911 journals and diaries have been in the public domain only since 1994 (before that they were available for vetted scholarly inspection and of course they were strategically distributed in 1916 to discredit Casement and stymie an appeal for clemency – the National Archives contain a letter from ). At the National Archives, they are accessible now on microfilm, Reference HO 161 (indicating that they were Home Office files). 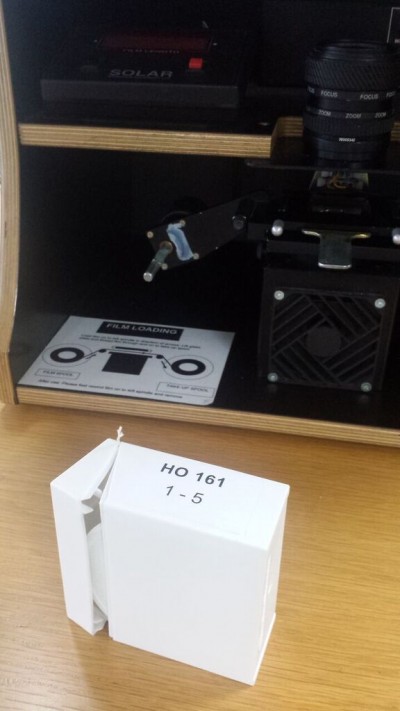 There’s a still a light, democratic vetting process involved in registering as a reader at the National Archives, and a negotiation of the computer catalogue, the storing system and then the microfilm reader. You have to acquire some knowledge before you get to see the diaries. In the transfer to microfilm, the original white pages and dark writing has been inverted so they’ve literally become the Black Diaries that they were names in 1959 in Singleton and Girodias’ book about them. I found it a challenge to decipher all the handwriting but I can read much of it. The sexual content exists alongside details of his travels, his meals, his expenditure, his research:

‘X Deep to hilt’ ‘Deep screw and to hilt’

See it coming’! In Dublin. To Belfast, John McGonegal X 4/6. Huge & curved. Up by Cregagh Road met by chance near clock tower & off on tram – it was huge & curved & he awfully keen.

Turned in together at 10.30 to 11 after watching billiards. Not a word said till – “Wait – I’ll untie it” & then “Grand” X Told many tales & pulled it off on top grandly. First time after so many years & so deep mutual longing. Rode gloriously – splendid steed. Huge – told of many – “Grand”.

Much of the content is already familiar to me but seeing it in his handwriting, sometimes packed on the page, sometimes loosely trailed across it, brings a new sense of him. I’m also struck by the pages opposite the entries that bear the ink blot traces of his writing. They seem like a code of their own, a transposition linked to the original but mysteriously beautiful in their own right, perhaps as I imagine the choreography will be. 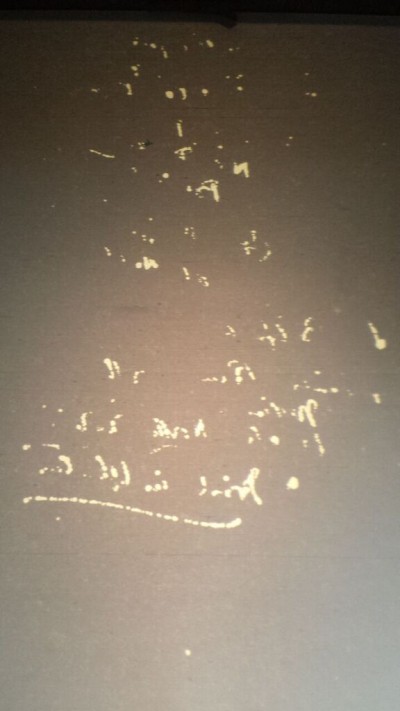