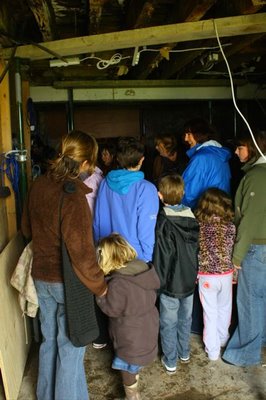 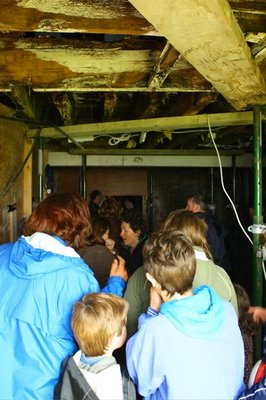 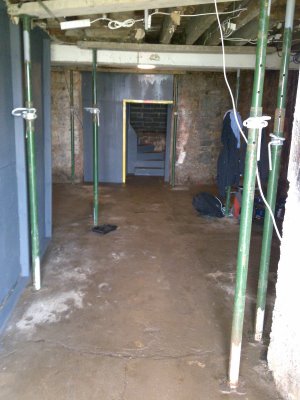 I suppose I was concerned that the TV coverage of Tattered Outlaws didn’t really mention anything about the choreography. But then I realised that by focusing on the opportunity for people to get inside the towers and to reflect on what that heritage means, the coverage is acknowledging the most important aspects of the choreographic work. For the people who enter the tower, the experience is a structured physical experience. They shift from the relative warmth of the outdoors to the towers cool damp interior. Their eyes must adjust to the interior gloom. They may queue until it’s time to stoop carefully to climb the switch-back stairs we’ve built until the arrive on the viewing platform in front of the screen. Only six adults can fit on the small platform at a time – it’s a dance which many can experience but not as a big group. Standing in front of the screens, the viewers are encouraged to connect beyond the immediate physical experience of the Skerries tower (they rain my drip on them) to the other towers and to performances glimpsed on them. 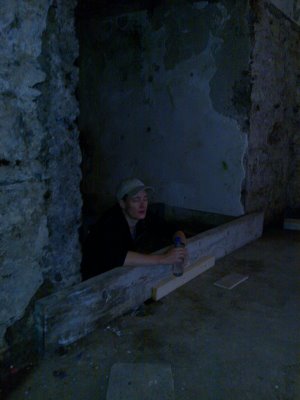 This experience of visiting the installation corresponds to my own physical engagement with the tower. They came alive to me when, on the advice of some passing schoolboys, I was able to climb in to the tower at Loughshinny and make my way on to the roof. The physical buzz of climbing into the towers, the nervousness of making my way around the spiral staircase in the dark, the emergence on to the roofs which open to the sea and the surrounding coast, dark, light, sunshine, rain, all fed in to the dances I made for the films. 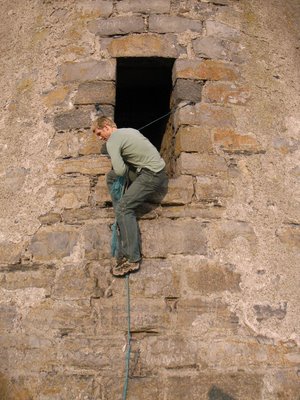 After those initial visits to the towers I went back to the studio to develop some physical material, phrases of movement that had enough nooks and crannies for me to explore each time I danced them. I brought that material to the towers for the filming and adapted it to each tower, the conditions I found there and the feelings evoked in me by the encounter between my movement and the place.

When you dance in a studio and on a stage, for the most part, there is a relationship between the movement and the space that you can take for granted. The floor will be even, with a particular texture. Dancing on the towers is a constant dialogue between the movement I’d prepared and what the tower offered. For the most part, I danced in the derelict towers. There’s broken glass, rough stone, grass, bird shit, steps, wind, rain. So each time I put my foot down and slid and rolled, my intention was challenged by the tower. In an instant, I had to adapt and a whole new set of images, memories, feelings flooded my body. I may have prepared the material but there was nothing predictable when I brought it to the tower. Though the tower is strong and my interaction with it temporary , I leave traces of myself on it, small bits of my DNA scraped off, pebbles shifted, grass disturbed – small, impermanent traces – but tokens of my presence nonethless.

Bernadette’s encounter with Balcarrick followed the same process. Her material is prepared but transformed by what she finds in the tower. Her DNA in the smeared in spit on the surfaces of the tower. 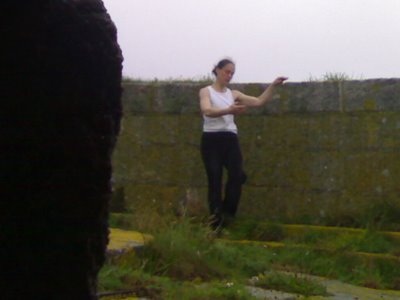 And why the other people? Zach and Eva play, a kind of connection between imagination and physical exploration that I think is a good way to help people understand what the ‘dancers’ are doing. Dorothy tells the story of her personal history with the tower. Hers is a process by which memory becomes movingly present, a process we can read in her body as she circles the tower to keep up with the camera, making sure that it hears what she wants remembered. Joe, at his bench calls each of the towers in turn with his Morse code. We know there will be no response but the gesture of calling is important nonetheless. 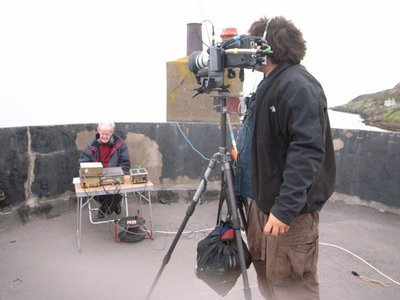 And Tom, reading his book, silently, is also a renowned broadcaster. He is the owner of the tower but his background in communication makes him an appropriate presence. I read in his stillness a calmness and self-assuredness that provides a counterpoint to the fretful physical explorations elsewhere in the films.