I’ve mentioned the Public Art project for Fingal County Council that Dan Dubowitz and I are collaborating on. We’ve been developing the project over year and a half and are on our final phase of shooting this week.

We’re filming a solo performance on top of each of the twelve Martello Towers in Fingal. Of course, ‘performance’ is quite the right word, not only because some of the participants would not think of themselves as performers. They are inhabitants of the towers – people who spend time in those squat and solid buildings, some with recent temporary histories in the towers, others with long associations to them,. Some of the inhabitants have the expanded physicality of dancers, some don’t. Maybe they’re a kind of animus of or in the towers. There’s definitely an encounter between the bodies of the inhabitants and the body of the tower they inhabit.

Some of the towers are derelict,. Others have been renovated to uses other than their original defensive purpose. They are a family of towers, built together as a defensive unit. Having never fulfilled their defensive purpose, each of the towers has accrued its own history. Our project is to tentatively, imaginatively re-establish the family connection.

Yesterday we spent time in the Skerries tower that is being partially cleared out with the council’s help to house our installation of films. Today we went back to the tower near Lough Shinny. When we started this project, the council, in the interest of our health and safety, had us don white overalls and facemasks to enter the Skerries tower. The dust from pigeon droppings is toxic, apparently. The council also said that access to some of the towers like Lough Shinny might be difficult to arrange. However some local boys told us there was a rope fixed to the entrance of the tower that we could use to scale the wall and that’s how we’ve entered the Lough Shinny tower each time we’ve worked there. It’s a different kind of performance that comes from a body that’s climbed it’s way to its performance space. 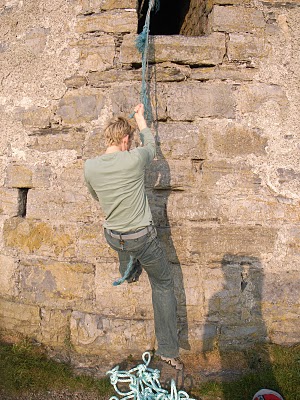 We’re not the only ones who get in the tower. Broken bottles, condoms and cigarette butts suggest how some people have found their own, unofficial use for this particular tower. It continues to be a safe haven.

But I couldn’t work out what or who brought the thousands of blue rubber bands that cover the inside and roof of the tower today. They make for a strange and beautiful patina on the film. And they allowed new moments of my dance to resonate. The towers have lots of these little surprises 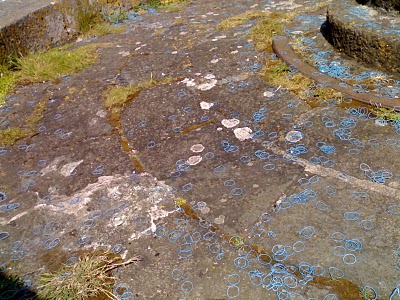