Looking at the Grand Canal Theatre video material, I remembered images from Orhan Pamuk’s The Black Book. It’s a kind of detective novel set in Istanbul but the novel is as much about the city and its expression of Turkish identity as it is about the narrator’s missing wife. It’s a difficult read; it is labyrinthine in its structure like Foucault’s Pendulum. But I recall clearly the dark spaces of the city he describes: the tunnels and caves beneath Istanbul which catalogue its history and contain a fantastical alternative version of the present; the dark central shaft of the apartment building where the narrator’s family live, a shaft where items lost and fallen gather. These dark spaces are a kind of unconscious – a space made of memory, fantasy and desire – what was and what mustn’t be. We build in the light but but can’t avoid dealing with these shadow spaces 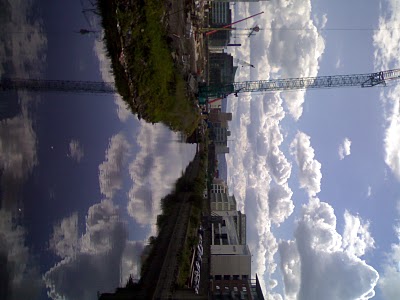