Watch the Throne: Una Mullally’s Eulogy at A Wake for Roger Casement

The Casement Project pays close attention to the historical legacy of Casement’s life and afterlife.  But that attention is in the service of figuring out what we need to be doing now: how we come together, live together, create the conditions where all kinds of people can flourish together.  Una’s powerful eulogy, delivered at A Wake for Roger Casement at Kilkenny Arts Festival, reminds us what Casement’s legacy might mean now.

She started with the Jay Z/Kanye West track, ‘No Church in the Wild’ 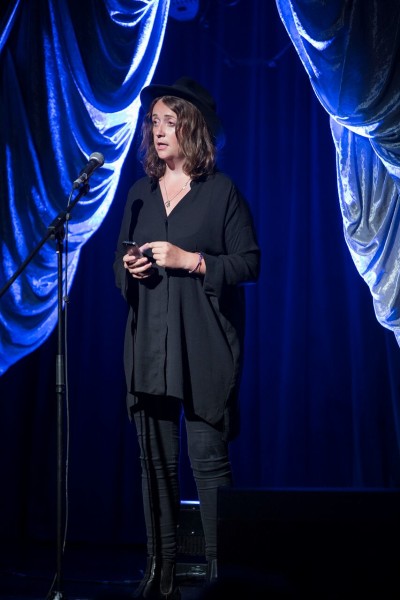 Human beings in a mob
Sanctioned by a king
With a lineage to God
What’s a God to a non-believer?
They won’t believe him, say anything
Don’t make it out alive
Alight alright, case closed in the wild

Homosexual chic
Forgeries make truth capeesh
The black books make white sheesh
Hanged on a comma, Abu Gharib on a leash
Beating on the door, a ghost with no apologies

All for Yeats’ screech
Out there scrawling, sucked such milk as he
Conrad was a writer, Cyclops winks one-liners
Overflow like guns to Howth, get the hell up out your seats
Connollies

And now a spoken word piece

Make it to Peru
Now what the hell you gonna do

Cyclops, “He’s an Irishman”
Kicking ball in a park in Belfast
With your name on it
Not that they’re a bit into names in the North
Mind you down South they changed it to Casement’s Fort
Maybe the ball kick is a Garryowen
That’s a dog
Tied up outside Barney Kiernan’s
And talk of Paddy Dignam
“I’m going to the Pisser, Burke”
And there I’ll read the paper
Of a martyr hanged, when the Sir is now silent
Stripped of a knighthood
Because the Dark one rises

Why do all our heroes end with a slab in Glasnevin
Musings over a pint in the Gravediggers
Pretending to remember them
Vowing to write more to our family
Our sisters, our Ninas
The nee-naw nee-naw
Of cops chasing down dealers

Watch The Throne
Then watch the judge
Slide his glasses down his nose in court
What did you pick up in the ferry port
A secret, a passport stamp
Did they have Duty Free back then or were you on your Toblerone

But back to now
Back to the drones
Back to the incessant moaning of us tapping on phones
CAN YOU HEAR US
ARE YOU THERE
Can our echoes reach out
To your fizzing bones in a pit dug by louts?

Which patriots do we choose to walk in the steps of
Roger that
And I pull from the past a nation on its knees
That no one can stop the march of
And no empire can appease
To you at your desk in 2016
Writing blog posts about Direct Provision
And Snapchatting the trip to Calais
There you are again
In the Observer on Sunday
Writing about Yazidis and British girls FGMd on their school holidays
If the papers could pay for you to go abroad
You’d come back with an eyepatch all Colvin and Fisk
Talking of risk and humanity and refugees in rubber ships
Pulled to shores and arrested, fainting and sick
Was that your boat or u boat with the fake life jackets?
The toddlers in the surf and the dirty right wing racket

And I’M SO HIGH you’d say
In the smoking section of Mother
The night we won everything when gay men were equal but not their mothers
Or their lesbian sisters who were still women too
But you’d be there, Roger, giving us a clue
Colonel Mustard in the Dining Room with the candle stick too
Telling us to focus that victories must be multiple
They equality does not exist if one of us is unequal.

Joe Caslin would draw you on a George’s Street gable wall
All gorgeous and gay and dapper and tall
And the flat whites and dry shites
Of the dirty old town
Would find a way to embrace you, single now, Claddagh ring upside down
Could we approach you, in the corner of a cookie cutter cafe
Could we broach you like Tara on a tweed cape and just say
Roger, I see you. Roger, I know. Roger, we love you.
Roger, do you want dessert? Today it’s afagato.

But meanwhile we imagine
So few of us just do
We want the comfort and warmth, and the hum of a stew
We want your legacy back.
Watch the Throne.
We want you.