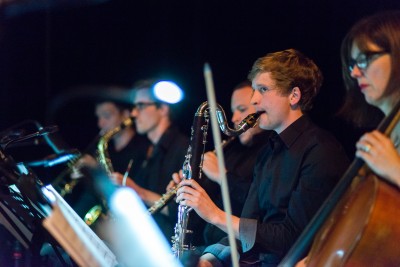 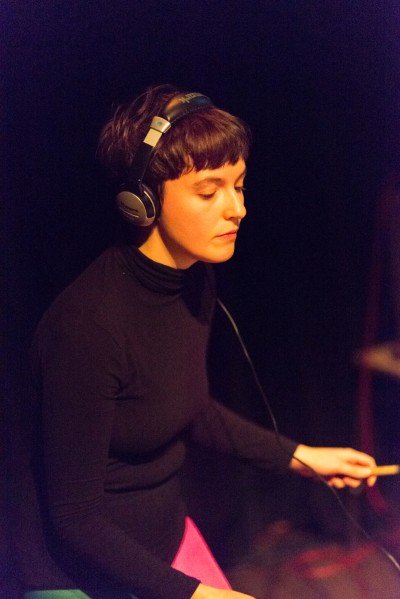 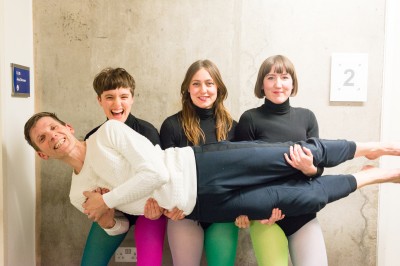 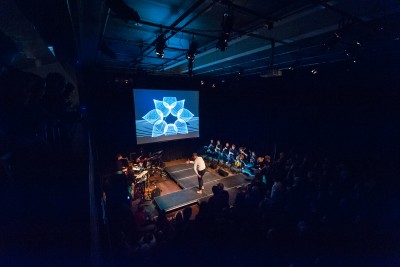 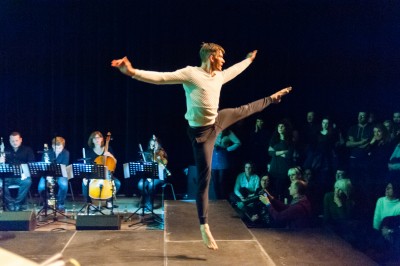 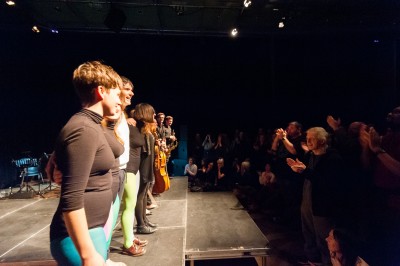 LMW_Stealing SheepThe stage is set, in an inverted T-shape with a low catwalk in the middle, so the widest part is closest to the audience. Stealing Sheep’s equipment is set up on the left, a row of six chairs are set out facing them on the right for Immix Ensemble. The wall opposite shows a projection of the net of CGI shapes – spheres stretched into a point on one side suspended in the air as glitchy electronica floats over the PA.

Stealing Sheep arrive without fanfare. Immix file in on the right and take their seats. They begin to warm up their instruments and the low brass tones blend with the fuzzy bleeps being played over the PA. The background music fades out as Stealing Sheep fade in with burbling keys and a roll of the floor tom. Immix’s brass section strike up an ambient, chirruping sequence and a man steps onto the catwalk. The man is choreographer Fearghus Ó Conchúir. His partner Aoife McAtamney will not be able to join him tonight. He strikes a pose to the left of the stage reminiscent of that of a life drawing model, knees bent, stretching his muscles. We wonder if McAtamney was supposed to be on the right-hand side of the inverted T. It doesn’t matter.

Stealing Sheep summon a kind of folky electronic drone, repetitive and rhythmic. Emily Lansley is playing a lap steel guitar, fiddling with various pedals for a treated sound, as drummer Lucy Mercer sings about moving a little bit into space that’s left behind. She could be singing to Ó Conchúir as he stretches into the main section of his catwalk, his movements jerky, swinging his legs high with his back to us. We stifle a chuckle thinking about Monty Python’s Ministry of Silly Walks; this is more modern ballet than classic comedy.

The music becomes a proggy, sci-fi soundtrack with an insistent recurring phrase being played by Immix’s strings. Ó Conchúir is making wider shapes with his body, moving his hand just as insistently as the cellists to his right. The music strips right back and goes gently ambient. He’s making longer lines, his face agonised. Daniel Thorne on the saxophone counts in Michael Walsh’s oboe and Stealing Sheep edge their way into the creepy folk of ‘Evolve and Expand’ from this year’s Not Real album. The snail’s pace delivery of the opening line “They will cook you up and grind you down for glue and clay,” has left Ó Conchúir on the floor, looking up at the sky with his arms outstretched. The visuals have become a trippy triangular tunnel, all the colours of the spectrum.

He’s on the edge of the low stage, looking from one side to the other, from the experimental pop band to the experimental classical ensemble. A throbbing bass pulse comes in, weird, intimidating, dissonant rhythms. Rebecca Hawley sings into a distorted microphone the instruction to “Give it a go/You might like it,” and she’s right; Ó Conchúir begins to fling himself around to the flashing green visuals and rhythmic handclaps from both sides of the stage. As scratchy strings and spaghetti western guitar come in and the lights flash, his movements become more balletic, yoga stretches, triumphant leaps. The sound is bassy, heavy, more confident. Hawley yells again “You might like it!” and the brass meshes with the bass and the keys jig around as much as Ó Conchúir; he leaps into the air clipping his heels together and with grins of relief all round, it’s all over.

The sense of relief at a job well done is palpable from all collaborators. And that’s what this is: a genuine collaborative performance where no element is lesser than another, and without any one element the whole would not be the same. It makes you wonder what the piece would have been like had Aoife McAtamney not been ill, but not as much as it makes you wonder what Stealing Sheep’s follow up to Not Real will sound like. Hopefully further collaborations happen in the future, and not just on stage but within a wider creative field as this was a very special partnership between Liverpool Music Week and Liverpool Irish Festival. A complete success and an absolute joy.

Read the review at www.godisinthetvzine.co.uk