‘The capitalist narrative is a growth narrative – more money, more GDP, more cars, a bigger pension fund but human existence is equally about loss: we loose our health, we loose our loved ones, we loose our lives. The market doesn’t really have a narrative for loss’ 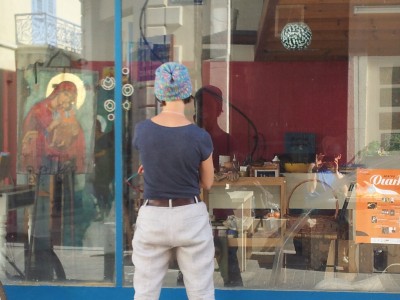 It’s Easter Sunday as I leave Cyprus (at least Easter for Roman Catholics since the Orthodox Church here will celebrate Easter in a month’s time – but our hotel is next to the Catholic Church where the city’s Filipina maids and carers congregate after Mass for socialising, shopping and beauty treatments on their day off in a way that reminds me of Hong Kong) and of course the narrative of suffering, sacrifice, death, mourning and resurrection has been on my mind this past week in Cyprus.

I arrived here last Sunday (24th) while Cyprus was negotiating the terms of a bailout with the Troika (EU, EMF, IMF). Monday was a scheduled bank holiday (actually Greek Independence Day celebrated by the Greek Cypriots) but the banks didn’t open again until Thursday after an unprecedented 10 days of closure. I was back in Limassol at the invitation of Dance House Lemesos. I had been here as part of the E-motional Bodies and Cities research project in November and was given the opportunity for some additional research time by the Dance House director Natasa Georgiu with a view to presenting a work in progress as part of their events concluding the E-motional Bodies and Cities project in Cyprus. Having had a creative and energising experience in Limassol last November I was keen to come back, even though my schedule meant I could spend no more than a week. I wanted to use the opportunity to work again with fellow E-motional Bodies and Cities artist, Olga Zitluhina, from Latvia since we’d often discussed my making a solo for her. 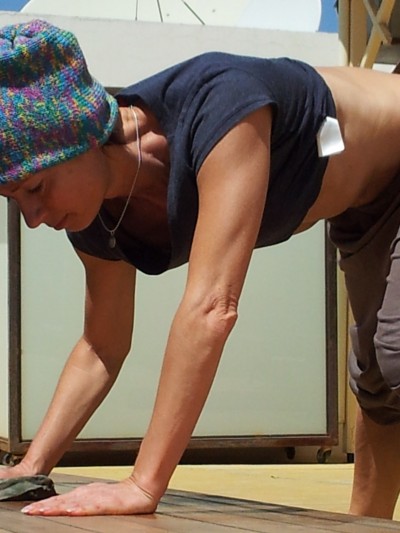 But things aren’t now as they were before. Unlike the relaxed and open Cyprus we encountered in November, we found a a country and people in a state of shock and anxiety. The bailout negotiations and the appalling terms proposed for it created a heightened concern but the economic decline has been steady since our last visit and many shops even in the centre of the city lie empty. 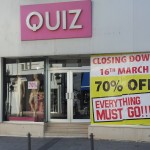 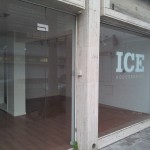 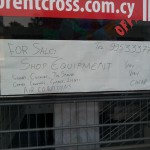 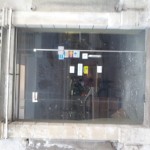 One abandoned house which became part of our E-motional map of Limassol last November represented the change to me clearly. 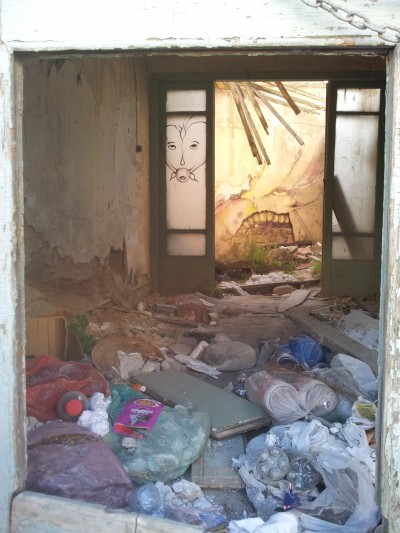 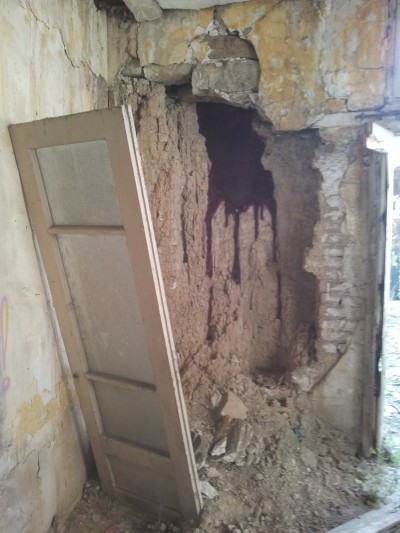 Last November it was derelict and at night-time a little forbidding but we could enter it and find something to inspire creativity. Now we found it boarded up with the graffiti Fuck Life on it. 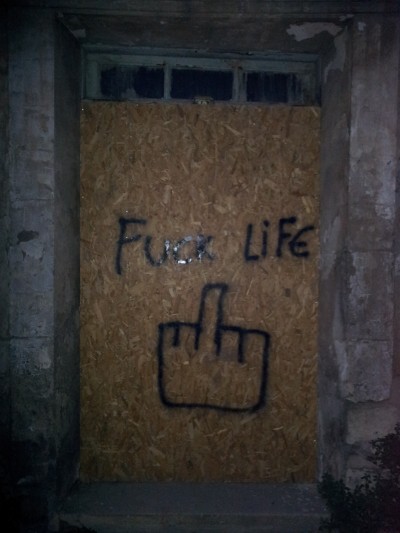 And our experience of many of the people we met is that they were a bit ‘boarded-up’ too – not unfriendly but closed, without the energy for friendliness as they retreated behind their boards to absorb what was happening in the country. This process of retreat and closing down made me think about Cure, which is not surprising since my body is full of that material now. This is also a change since November and before I came I realised that thinking of collapse and recovery made sense at this time in Cyprus. I decided that I would use the research time here to interrogate the material I’ve been given for Cure, to stay connected to it but also to test it, or elements of it, in this charged environment. I also wanted to use the opportunity to show it to Olga without explaining too much its genesis, asking her to be an audience for it, but also to translate what she was seeing into her own movement. I didn’t have the appetite to design movement for her and besides she is a wonderful improviser. Instead, I wanted to provoke or inspire movement in her – a choreography by influence rather than by edict.

Olga noticed in my performance of the Cure material a seriousness whose necessity she gently queried. She has the skill to bring lightness and unpredictability to her performances and I asked myself if I could do the same. I know I’ve often said, to the dancers in Tabernacle for example, not to let material get stuck in a predetermined emotional state. Can I do the same for Cure? Can I be playful with collapse and recovery? I am serious, of course, and there are legitimate reasons for being so. But when I am with people who understand the need to be serious, then I am relieved of the responsibility to be so and can become lighter. Olga gave me this gift during our time together, since her playfulness is born of serious understanding. By the time we presented our work-in-progress on Friday, I could find a lightness in the material we presented. 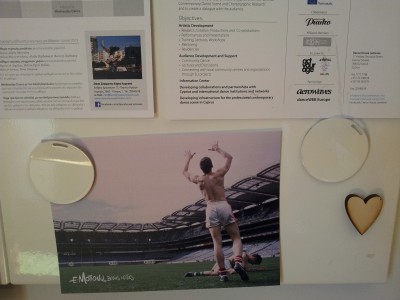 While working on testing Cure and absorbing Cyprus with Olga, I also had the opportunity to revisit Match for a performance in the local soccer pitch on Saturday. It was a kind of pleasure to discover that Matthew and I could still physically fulfil the movement and that the choreography had an integrity and coherence that still survived. The last time we performed Match was at the Expo in Shanghai in 2010 where I finally injured my knee. I was reminded of that experience not only because of Match but because the work with Olga, wise and playful improviser, reminded me of conversations with Xiao Ke and her questions about the structured discipline of how I approach my work (warming up, sweating, scheduling, planning). As I celebrated being able to dance again, I wondered what I’d learned since that stressful, emotionally-freighted experience at the Expo. Am I cured?

I was a little under the weather this week, suffering from a cold, probably brought on by a 6:30am flight from Cork last Saturday, by the shock of being attacked on the street in Cork the previous night and by another early flight from London to Larnaca. I am busy at the moment and when I realise how much I am responsible for, it does make me wonder if I’ve learned. 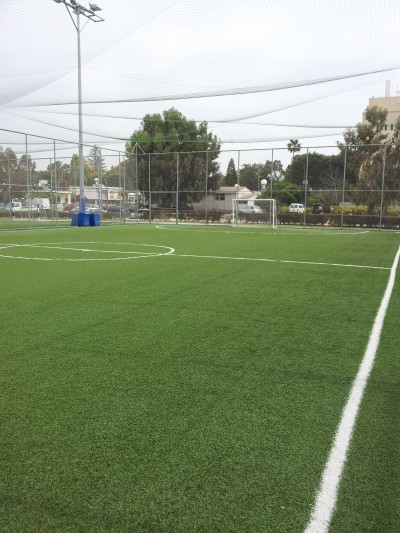 Nonetheless, there was great pleasure for me in performing with Olga in the Dance House and again with Matthew in the Fitidio pitch. I was particularly pleased because the piece looked vivid under the stark halogen lighting on the luminous green astroturf and also because immigrant workers who were playing soccer on the adjoining pitch and young children who had been playing nearby joined the regular dance audience to watch us perform. It is important for me that people who might never come to a theatre to see dance should get to encounter it in a way that they might connect with. Matthew noticed after we had rehearsed on the pitch earlier that two guys on the pitch next to us were trying out one of our lifts and a couple of children joined us in our pitch throwing themselves on the very comfortable astroturf in their own version of our movement.

Children have no difficulty falling and getting up again. I’ve noticed when I’ve presented work to audiences that aren’t familiar with contemporary dance that they remark on the fact that I am like a child in that I am comfortable moving around on the ground. I guess it’s not a thing that adults do so much or give themselves much permission to do. And it’s a skill we lose if we don’t practise it. Dancers practise falling and recovering quickly and I’ve noticed in Cyprus that it is the dancers who are already thinking of what next while I sense others are still in the stasis of shock. In this case, the dancers will test the way ahead, getting things moving when crisis has caused things to stop. 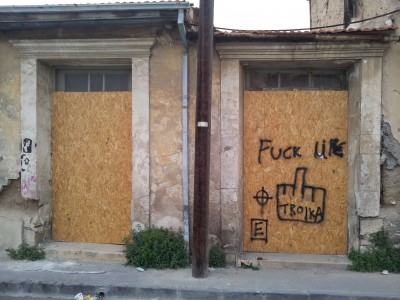 Already the movement is evident in our boarded up house. When I went back to it again this week, I found that the Fuck Life graffiti had been transformed to Fuck U Troika and next door in another derelict house, someone has made a small pyramid sculpture of plastic cups. 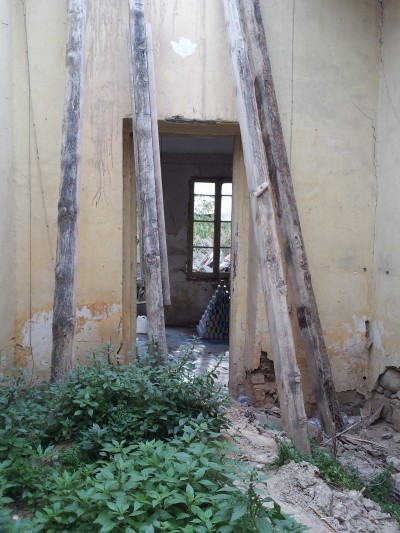 “But what in God’s name do you imagine? That the earth will awake in the spring?”
– Hamm in Samuel Beckett’s Endgame