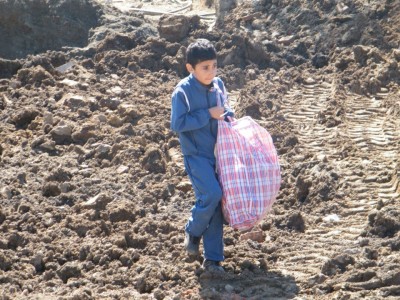 When we were asked to introduce ourselves yesterday at the first gathering of the whole E-motional Bodies and Cities Research group in the Zona D studios in Bucharest, we were encouraged to say something that had an emotional impact on us. What I mentioned was the feeling of pleasure I’ve experienced at finding elements of this E-motional experience connecting to each other in different ways and more importantly connecting beyond E-motional to other parts of my life: last week I was in Cyprus working with Olga as an extension of our E-motional research, we saw Arianna there but the circumstances of financial crisis and uncertainty meant that it was relevant to bring my preparation for Cure into the research. The previous week, as Curator of the Artistic Programme at Firkin Crane, I had welcomed Madalina to Cork for her performance (with Mihaela Dancs) of (anti)aging and invited Luke there to lead a post-show discussion. And we got to connect with Gemma, Mircea and Laura from the other research group in Cork too as they presented their Internal Facade performance. 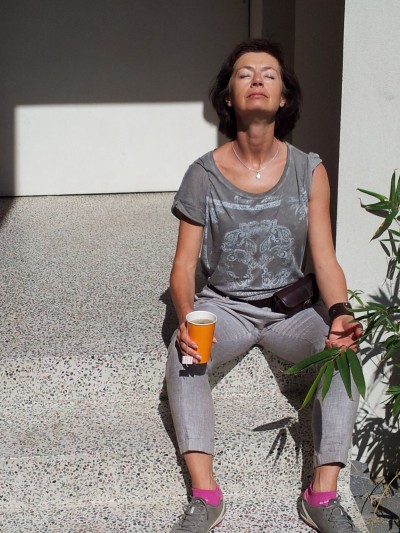 However another unexpected and rewarding connection has been between this E-motional research and my very new PhD research in Geography. I’ve written before about the Art and Geography conference I attended earlier this year in Lyon where I realised the value and relevance of our e-motional mapping process. At the conference I heard Dr Karen Till present a paper on some of her research on Wounded Cities, focusing in particular on the clearance of the El Cartucho slum area in Bogota and the resultant displacement of the existing inhabitants to make way for a new park of The Third Millennium. Karen is in the Geography department in Maynooth where I am doing my PhD and along with Prof Gerry Kearns, my supervisor, has been building exciting links between academic geographers and a range of artists in Ireland and abroad. In Bogota Karen’s focus has been not only on the wounding of the city caused by this displacement of a long-existing community, but on the reparative work of care carried out through artistic interventions by the Mapa Teatro theatre group.

Karen’s work has been in my mind through out our E-motional research since the displacement of docklands communities in Dublin to make way for a new Docklands driven by financial services and international investment, as well as the displacement of Greek and Turkish Cypriot communities in the wake of the 1974 invasion there has meant the themes of her work were apposite to our enquiry. Coming to Bucharest has given the notion of wounded city an even stronger relevance. As a preamble to our first walk, we watched Off the Map (2006), a film by Ioana Marinescu and Robert Fearns. The film details the erasure at Ceaușescu‘s instigation in 1984 of an estimated 40,000 home in 3 days to make way for the gargantuan Palace of the People (the world’s biggest civilian building) and the Victory of Socialism Boulevard that leads to it. To this day, the number of displaced people is a secret and though Ceausescu was overthrown, the building project was completed and is now home to the country’s parliament, a symbol of national pride, and has become an important tourist destination in the city. Interviewing former residents of the area in 2000 as well as people on streets around the Palace, the films asks: ‘Is private remembering alienated by organised forgetting?’

The fact that the other research group is based at the National Museum of Contemporary Art (MNAC) which is situated in the Palace of the People makes this history difficult to ignore. However that organised forgetting and the troubled history it represses has re-emerged, not unsurprisingly Freud would have said, in the illegal destruction by the Municipality of the Hala Matache, a protected heritage site and working market in the area just behind the Zona D studios where our research group is based. The area has a big Roma population but the market has been popular because its prices are cheap in comparison to other places in a city where big shopping malls are proliferating and giant advertising billboards blight the city’s buildings.

Hala Matache was demolished just this month under cover of night and despite legal opposition, negotiation and a campaign of protest by NGOs. The plan is to build a motor-way through the city to connect The Palace of the People to the Government building. It will be a motorway that allows cars to travel quickly but obstructs pedestrians and destroys a neighbourhood. In echoes of the clearances that preceded the building of the Palace of the People, parts of the Hala’s structure were removed so that, according to the architect Celia Ghyka who took us on a tour of the area, the building would fall of its own accord. In the Off the Map film, former residents tell of how buildings weren’t completely destroyed in the first round of demolition but sufficiently ravaged so that they were uninhabitable and also vulnerable to the predations of scavangers and of the elements. There seems a particular cruelty in not administering a fatal blow.
When Hala Matache was eventually demolished concrete blocks were erected around the site to conceal the activity. 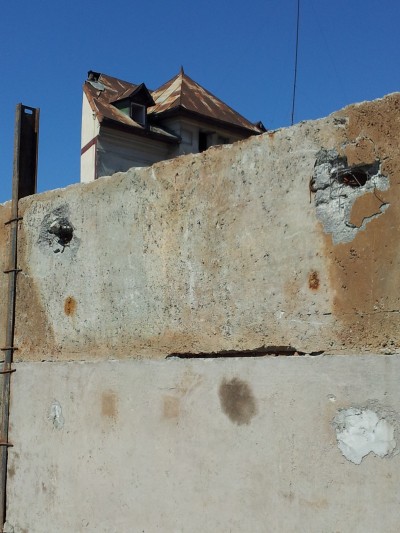 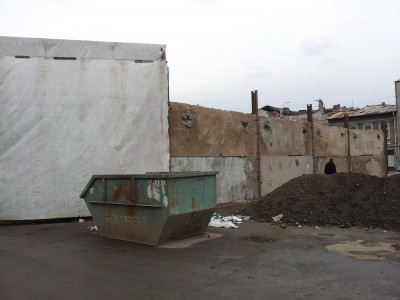 Seeing them reminded me of what Ceausescu’s designers had done erecting high rise buildings along the Victory of Socialism Boulevard that concealed the destruction behind. ‘Curtains of concrete’ is the phrase that the film uses to describe them.
Covered in white fabric, the concrete around Hala Matache is all the more literally curtain. 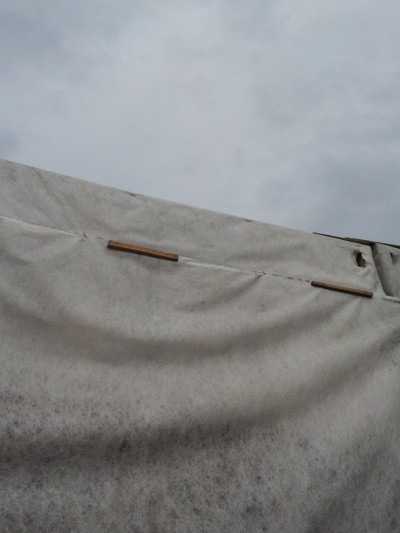 Karen Till’s work on Wounded cities, as detailed in her article in Political Geography, draws on Mindy Fullilove’s concept of root shock (Fullilove, M. T. (2004). Root shock: How tearing up city neighborhoods hurts America, and what we can do about it. New York: One World/Ballatine Press.)

Root shock is ‘the traumatic stress reaction to the destruction of all or part of one’s emotional ecosystem’ (p. 11). Fullilove draws a parallel of root shock to the physiological shock experienced by a person who loses massive amounts of fluid as a result of injury, a shock that threatens the whole body’s ability to function.

Noting the connection of root-shock to a corporal experience, I also recognise the provenance of the term in the systemic shock experienced by plants that have been uprooted. Seeing the open soil of La Matache, I remember the bog we visited on our first E-motional Bodies and Cities research in Ireland. I see the grave in the holes there, but also the soil turned over for planting. Can we plant flowers there? Can we plant something that’s not a motorway? As we walked through the area, Roma children were playing fearlessly on the soil. Can their play move forward beyond the shock? 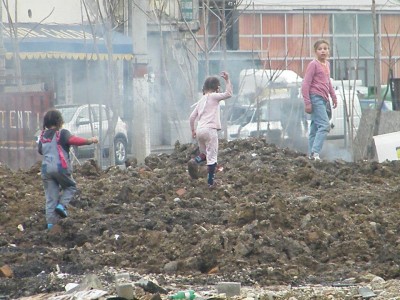 Citing geographers such as Doreen Massey, planners such as Jane Jacobs, and social psychologists such as Kai Erikson, Fullilove describes place as having a central function in an individual’s emotional and social ecosystem (compare Tuan, 1977). For Fullilove, place is a kind of exoskeleton (personal conversation with author, 2009). As such, we can understand place as always becoming, as within and beyond us, and as functioning as a kind of social protective shell, an understanding that has resonance with some Native American philosophies of humane environment relations.

When we move through and navigate our environments according to unlimited possible pathways, our patterns of movement are a kind of ‘mazeway’ that also provides us with security: ‘Just as the body has a system to maintain its internal balance, so too, the individual has a way to maintain the external balance between himself and the world’ (Fullilove, 2004, p. 11). Similarly, according to medical anthropologists Arthur and Joan Kleinman, bodily memory is often limited to discrete analyses of the brain, body, mind, or person only (Kleinman & Kleinman, 1994). They introduce the concept of ‘enacted assemblages’ to account for the ‘interconnected cognitive, affective, and transpersonal processes’ of body-social memory (p. 719). Drawing upon Chinese conceptions of everyday life and social relations, the Kleinmans argue that the local interpersonal world is the primary means through which sociosomatic processes shape the body and bodily processes shape social space.
… when individuals are forced to leave their neighborhoods and their protective mazeways are destroyed and/or cannot be made, root shock, according to Fullilove, may stay with a person for a lifetime. Fullilove argues, moreover, that the physical fabric of the neighborhood one grows up in also provides the cues and opportunities for the intergenerational transmission of stories, and as such root shock may affect multiple generations. Thus root shock can be inherited through social, bodily, and place memory. 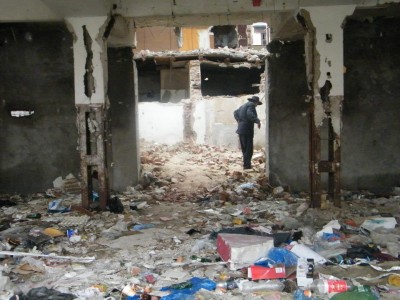 As we walked around La Matache we passed a gutted building whose interior was filled with rubbish bags (colourful as Olga has noted, like the vibrant colours of the Romanian flag). An old man in a dark overcoat made his way slowly and a little unsteadily through the rubbish. I have no idea what he was doing – going to the toilet? – but the image of him wading through rubbish was arresting and moving and also familiarly so. It was if he was in a performance. I already recognised him as a striking image (from Beckett perhaps with a plastic update) and there is much that we’ve encountered in Bucharest that already has the familiarity of a performance for me (the drunk man in the middle of the street, slowly, slowly rolling down through his spine like a dancer at the beginning of class, to pick up something from the street, as cars swerved to avoid him. Him repeating the action, to underline his choreographic sensibility.) This already existing plenitude of performance challenges the need for us to bring our performance-research to these streets, though maybe it invites us. More importantly, my recognition of these images makes me wonder memories of other wounds I am seeing here:

Places, even when materially demolished, remained haunted by what Casey (2000) describes as the ‘unresolved remainders of memory’. For Casey, memory traces are ‘re-discov- ered’ with evolving circumstances through time (belatedness). These unresolved remainders ‘do not consist of depositions laid down as is assumed in theories preoccupied with leaving marks and traces in an unchanging material base but in pathways that branch off every more diversely into a multiple futurity’ (p. 277). At some moments in time and in some places, we might encounter those residuals and move through pasts to possible futures and return differently to presents. Places are thus both personal and social, made of human and non-human lives. Through making and maintaining places, individuals sustain the mazeways and enacted assemblages created through personal, bodily, social, and material worlds.

So what do we do about it?

‘Trauma does not occur from an event or occurrence that caused pain or suffering per se, but from an individual’s inability to give the past some sort of story. ‘ Karen Till, ‘Reply: Trauma, citizenship and ethnographic responsibility’,

I’ve written enough in this blog post already but the work of this time in Bucharest is oriented in relation to that question of what do we do? (Who are we?, Should we do anything? To whom is our responsibility?). What is most striking about Karen’s work on Wounded Cities is her sensitive reading of various artistic interventions, particularly in relation to place memory and to the development of what she calls an place-based ethics of care. (Karen is not alone but is still unusual among academics in that she has developed her theoretical work in response to practice rather than looking for examples of practice that can be made to bolster an existing hypothesis.) Care has been a strong theme in our research from the outset, a care that we test, evolve and model within our group (a collaboration of strangers who have become colleagues and now a small and temporary community of friends) and that we share in the places we work. It is a concept that has emerged in my work on Cure too.

What care can we exercise in Bucharest? 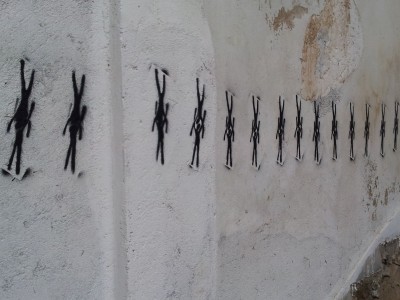