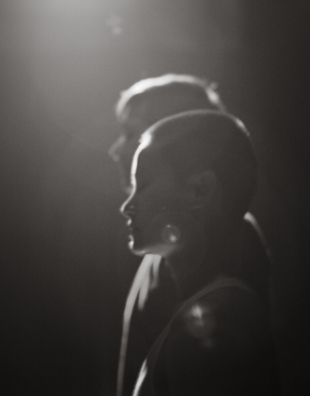 Intercultural Unit of Dublin City Council Commission with support from The Arts Council of Ireland.

Originally produced by Fearghus Ó Conchúir in association with Project Arts Centre and subsequently developed and toured with the support Culture Ireland and the Irish Pavilion at the 2010 World Expo.

Dialogue Shanghai is a development of the first collaboration between an Irish and a Chinese choreographer that started when I saw Xiao Ke perform in Beijing in 2006 and instinctively felt a connection with her that I wanted to pursue. Since then, we have tried to understand each other’s worlds, to see our different bodies – one tall, male, Irish, one shorter, Chinese, female – as a way to explore our different ways of being in the world and to investigate how to create an environment where those differences can coexist. We use the ancient Chinese Luo Shu grid as a framework for our performance but try to avoid the usual East/West division by drawing on a common spirit that connects us despite the obvious differences we present.

Like our relationship, Dialogue evolves with each performance. For Dialogue Shanghai we have worked with a new composer and experimental musician, Feng Hao and with the video artist, He Long to enhance and clarify the work. Dialogue Shanghai was developed for performances to coincide with the World EXPO in Shanghai. It was performed at the Irish Pavilion and in the Spring Festival at the Ke Contemporary Arts Center.

Dialogue at the Ireland Pavilion EXPO 2010