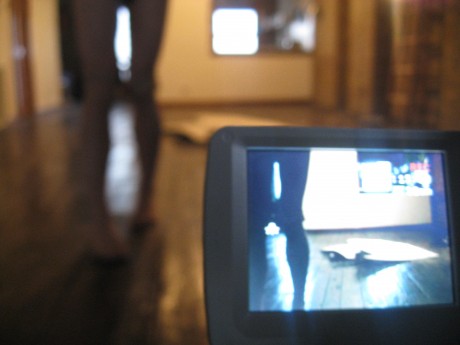 In My Skin, is part of a series of performance and video works produced at the intersection of the practices of performance artist Roberta Lima and choreographer Fearghus Ó Conchúir. Since their first encounter in 2009 at the Red Gate Studios, Beijing, the pair has found a common interest in probing the body’s limits experienced in the body’s encounter with the architectures of gender, sexuality and politics. In the context of Chicago’s rich architectural heritage, Lima’s training as an architect and Ó Conchúir long time research on the relationship between bodies and buildings in the context of global urbanisation have led the artists to a particular focus on the materiality of building construction. The physical disparity between the bodies of Lima and Ó Conchúir tells a particular narrative of gender and power that the pair’s interaction complicates with inversions, framing and mediation.
In my skin, follows Rebirth in their latest series of work and sees Lima’s use of Ó Conchúir’s body as tool and material in sculptural construction and a performance of power. Ó Conchúir’s body, clothed in the ill-fitting paraphernalia of Lima’s earlier performances, absorbs the intervention, moves its traumatic resonance and carries it forward.

In My Skin was made with the support of the Artist in Residence Program of the Austrian Federal Ministry for Education, Arts and Culture and The Arts Council of Ireland/An Chomhairle Ealaíon