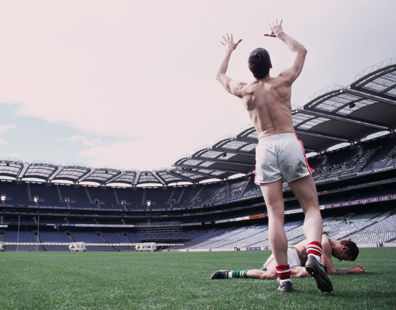 Match is a duet for two men set against the backdrop of Croke Park, Ireland’s iconic stadium of traditional Gaelic games. The story of the dance is one of contest, where, as in relationships, sport and battle, one emerges stronger and survives longer than the other.

Match was first screened on RTÉ in May 2006 and in Meeting House Square as part of the Dublin Dance Festival that year. It has since been shown at Dance on Screen festivals in London, Italy, Portugal, South Africa and China. In 2009, it was selected as part of the ContainR exhibition for Vancouver’s Cultural Olympiad.

“In Match (Ireland, 2006), directed by Dearbhla Walsh and choreographed by Fearghus O’Conchuir, the camera functions almost as an extra performer, transforming an intensely physical contact duet into a trio by the extent of its choreographic engagement. Location is also used to strong effect, as Ireland’s (deserted) national stadium provides an epic spatial arena and a charged cultural context for a male-to-male encounter exploring combat and competitiveness, with moments of tenderness and physical intimacy ultimately transcended by the will to win. The camera work mixes aerial shots with extreme close-ups, capturing an interlocked grappling of arms from beneath and following the trajectory of a movement arc with as much physical intensity as the performers themselves.” Realtime Arts Magazine, Australia – Read Article