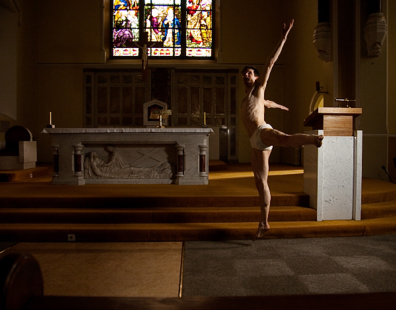 The film places the muscular physicality of a solo male dancer within the socially and spiritually resonant architecture of a Catholic church. This bringing together of dance and location invites a timely reflection on the impact of the Church on the formation of the Irish body.

As a counterpoint to this adult male dance, the film’s arc is shaped by the liturgical tidying up of a single altar boy at the end of mass. He quenches candles, removes cruets, folds cloth, replaces the altar bells. The film allows the dance to be read in relation to the boy’s actions.

The third presence in the chapel is that of a woman in her sixties who sits in one of the pews. While the boy is not aware of the male dancer, the woman sees everything.