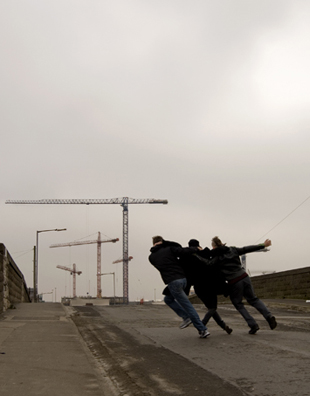 A dance about finding your place

‘Niche grew out of research that I undertook as Dance Artist in Residence for Dublin City Council. I wanted to work out how a body could adapt to the rapidly changing city around it. How a body – a person in fact – could dance on a building site, on a street corner or on undeveloped wasteground was a kind of metaphor for the other ingenious and resourceful adaptations that living in a changing city requires. As I have worked with other dancers and began preparing a piece for the theatre, it is the idea of fitting in, of finding a place that I have carried with me.’

“Ó Conchúir’s theme is universal and his thoughtful choreography is robust enough to take any number of readings, whatever the context.” Michael Seaver, The Irish Times – Read Article

Choreographer Fearghus Ó Conchúir didn’t set out to create a dance about the current financial difficulties, but it is just one pretty apparent reading of his latest work, Niche . The hour-long dance sets out to examine the common search for a personal niche and a safe refuge from the perils of ordinary life, but it sheds more light on what happens when one abandons that cubbyhole and when individuality is replaced by mutuality.

As the audience finds its own personal space on Project’s benched seating, three male dancers – Mikel Aristegui, Stéphane Hisler and Matthew Morris – walk on-stage with a chair and mark out their space, emptying bags of possessions and creating individual enclaves so that a coat slung on a chair-back becomes a tent-like barrier. These spaces become refuges where the performers retire from the dancing to read a book, glug on a water bottle or lie face-down with a hood pulled over their head.

But this isn’t where they are happiest; instead, they prefer to feel integrated and attached to the other dancers. At these moments, the movement is at its most joyous, like an arms-around-shoulders chorus line of kicks and lurches that roars camaraderie and bonhomie.

Throughout the proceedings, a solitary female, Bernadette Iglich, drags black refuse sacks of clothes and cardboard boxes along the back wall of the stage, ignoring and ignored by the other performers.

The resonance with today’s uncertain financial times isn’t just through the despondent street-life surroundings, but rather through a deeper sense that social moorings have disappeared and the moral framework that binds people must be recreated. Leaving behind the selfish exuberance of the Celtic Tiger for more stringent realities, the relationship between individual goals and the means to achieve them has become disjointed.

Similarly, in Niche , the dancers are drawn out from the relative comfort of their heaps of possessions to rediscover the informal rules that bind them, and finish up by creating a slow trio that shows a reassuring co-dependency.

But Ó Conchúir’s theme is universal and his thoughtful choreography is robust enough to take any number of readings, whatever the context.