I have the best intentions of blogging while I’m making work, imagining that it would be interesting to share the process of choreographing with its wrong turns and unexpected discoveries.  I thought in particular that the research focus of the Blank Canvas residency at the Firkin Crane in Cork would allow me to write something as I went along.  But it hasn’t happened so I’m writing now, after the fact.

I came to the residency with the intention of bringing to the theatre the approach that I’ve developed for site-responsive work (Tattered Outlaws, Match, Mo Mhórchoir Féin etc).  I wanted to treat as a site, the stage of the Firkin Crane (an idiosyncratic space with its curved back wall).  This approach is intended as an antidote to the largely commercial pressure to deliver choreographic product that slots into the interchangeable stage market places that theatres can represent, without acknowledging the physical, cultural and contextual specificity of each particular location.  Every dancer knows that specificity when they adapt their performances to whichever stage they find themselves on (a steeper diagonal, a movement curtailed, a focus up or down depending on where the audience is placed in relation to the stage) but in general we work to maintain the fiction that the performance is the same in each venue.

The Open Niche tour was one way of changing that approach, acknowledging that each performance was specific and responsive to its location.  To push that further in this residency  I wanted to imagine the stage differently, wondering what it would be like to rediscover this defunct communication technology (it’s survived a long time but will the stage still work in 100 years time?)

I’ve worked with Paul McCarthy, a lighting designer who manages the Firkin Crane,  to help me research these ideas through a solo for Matthew Morris.  Paul remarked before how much energy is required to power the contemporary stage and how little, by comparison, is required to view a movie on a smartphone or even a laptop.  This focus on energy made me think about the performer as source of energy, as heat, as movement, as sound and as radiant light.  (These ideas have been incubating since the research with Roberta Lima and I hope we can pursue them during her residency in Chicago next year).

From these simple thoughts, embodied in Matthew’s luminous movement, we’ve made  an experience for visitors.  I don’t think of it as a performance for audience which already fixes a certain relationship of people to space.  ‘Visitors’ allows me more possibilities to investigate participation and playful exploration.  Keeping that in mind has allowed us to circumvent some of the usual stage conventions.

The working title of the piece is Starlight, a title I’ve had in my mind for Matthew’s solo since we worked together on a commission I did for Crux Dance Company.  The piece, like starlight, is mostly viewed in the dark – a darkness that allows the delicate scintillation of the star’s radiance to be visible.

It is a new departure for me but felt right to pursue since it continues an investigation into the relationship I want to establish between my work and an audience/public/participants/visitors.  It also continues to investigate space and architecture as well as the eastern-inflected dialectic of light and shade that my work in China has highlighted.  Perhaps it remains aware of mortality and as I write that, the image of the sparrow flying through the mead hall from Bede’s  Ecclesiastical History of the English People comes into my head:

Your Majesty, when we compare the present life of man on earth with that time of which we have no knowledge, it seems to me like the swift flight of a single sparrow through the banqueting-hall where you are sitting at dinner on a winter’s day with your thegns and counsellors. In the midst there is a comforting fire to warm the hall; outside the storms of winter rain or snow are raging. This sparrow flies swiftly in through one door of the hall, and out through another. While he is inside, he is safe from the winter storms; but after a moment of comfort, he vanishes from sight into the wintry world from which he came. Even so, man appears on earth for a little while; but of what went before this life or of what follows, we know nothing. Therefore, if this new teaching has brought any more certain knowledge, it seems only right that we should follow it.

My aunt, Helen, died while I was in Cork.  She was a kind, generous and loving woman.

One final thought about Starlight comes from a text about scintillation or twinkling.  The apparent on and off twinkling of a star’s light is not caused by the star’s failure to maintain a steady output of light and energy.  It is atmospheric turbulence that momentarily re-routes that energy:

This does not mean that the star’s light is lost for that moment.  It just means that it didn’t make it through your pupil to your retina – it went somewhere else in the vicinity of your pupil.

I’ll let you draw your own conclusions….

By the way, knowing who to work with is also an important choreographic skill and I’m pleased that it’s one I’m able to hone with Matthew (and Peggy Grelat Dupont). 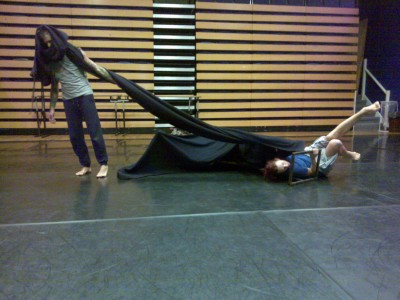 Matthew and Peggy at the Firkin Crane