Bodies in Urban Spaces at the Dublin Dance Festival 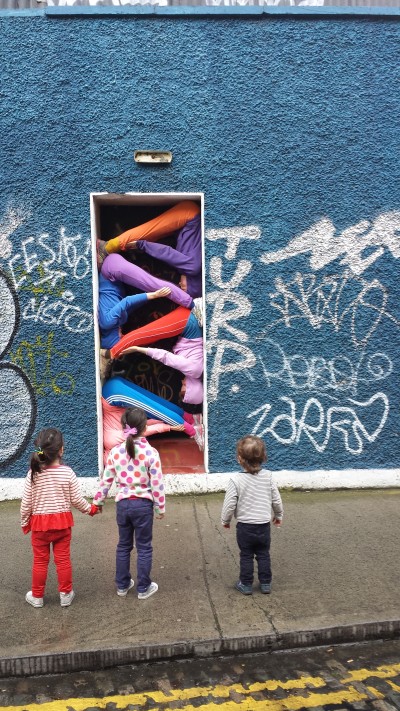 I’ve been aware of Cie. Willi Dorner‘s Bodies in Urban Spaces project for a number of years as it’s been a fixture in dance festivals across the world and videos of its various iterations have provided eye catching and arresting images of dancers squeezed into the crevices of urban space. My own research in the relationship between bodies and rapidly changing urban infrastructure recognises a kinship in Dorner’s project. It was fascinating for me to see my first live version of Dorner’s choreography (though he calls the assemblies of bodies ‘sculptures’) in Dublin, as part of this year’s Dublin Dance Festival, where I did so much of my own bodies and buildings work. 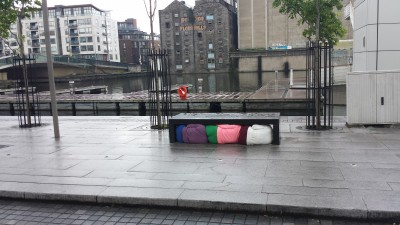 The route of Dorner’s performance started at the corner of the Lir Theatre, on the edge of the Docklands and brought the carefully marshalled crowd on a back street route towards Merrion Square, Stephen’s Green and St Patrick’s Cathedral, discovering surprising arrangements of dancers in brightly coloured clothing (mostly hooded in a way that diminished individuality. In fact I read one of the dancer’s comment on a picture of her on Facebook that it was a pity that her face was visible.). The vocal delight and wonder of the many children in the crowd was particularly enjoyable to witness, as it expressed out loud much of what I felt: ‘Wow!’. One young girl, on seeing a dancer suspended between a wall and a signpost, told her mother: ‘I’m going to so that at home – on my bed.’ 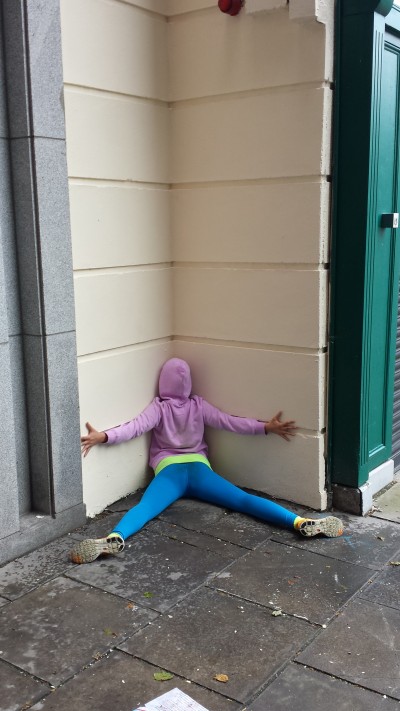 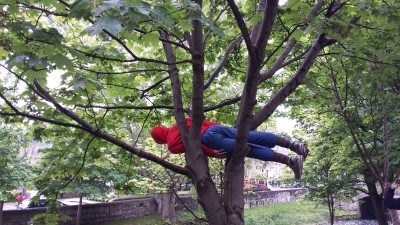 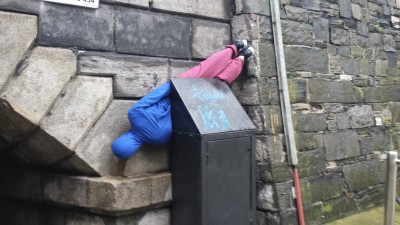 The dancers with their bright colours and athletic anonymity sometimes reminded me of superheroes who’d lost their bearings. 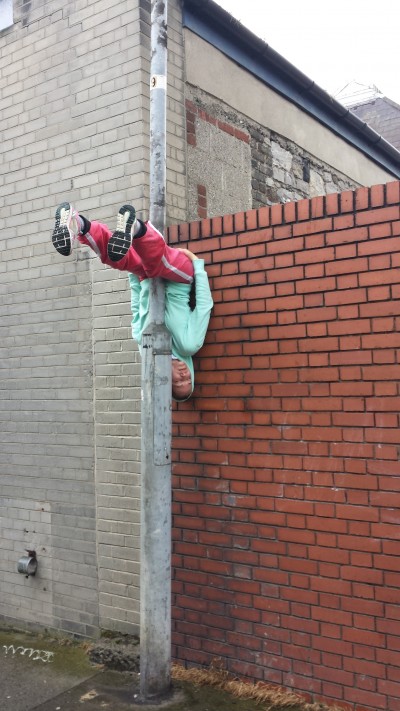 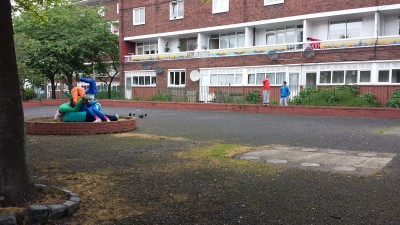 I loved that near the end of our route, a group of boys in bright hoodies noticed a sculpture of bodies, inspected it and followed the crowd to the next arrangement. Seeing them run and cycle alongside us, I felt the choreography had expanded to include them in a way that reminded me of the effect of Keep Walking in our E.motional Bodies and Cities work: the choreographic structure that is introduced can provide a lense for seeing a bigger choreography beyond it. 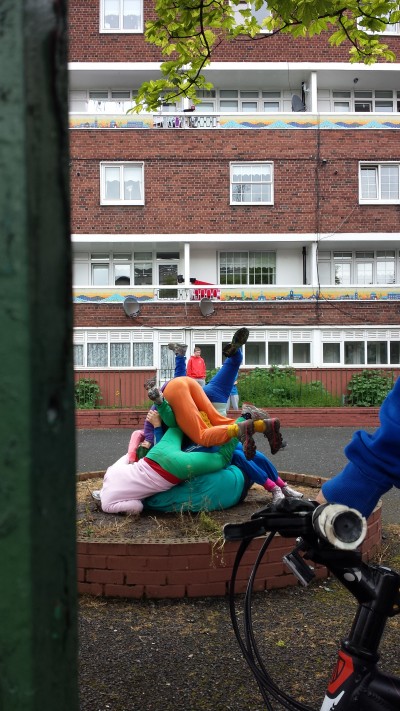 I was aware that there were elements of the wider choreography that irritated me. Travelling in a big group required marshalling for the purposes of health and safety and also to keep the performance moving along so as to allow the dancers to keep moving on to the next sculpture. Some of the marshals managed to do their job effectively and with good humour. Others were a bit more hectoring in tone in a way that diminished my enjoyment. It reminded me that that experience of the choreography is not just in the performance but in the often impossible-to-control contextual elements that become constituent to and not just framing of the experience. There were times when I felt I was in a tour group being directed by the tour leader to get my tourist shot of the designated ‘photo-worthy’ view. We were encouraged to photograph Dorner’s sculptures but also hurried on with an assumption that a photograph of the image was all the experience to be had. I appreciate that the physical demands on the performers and the pacing of the whole experience meant that they couldn’t hold those positions indefinitely. But being able to see the effort involved, to see the tiring of the dancers bodies as they jogged ahead of us to make the next sculpture were important elements of the live experience for me, reminding us that the delightful spectacle has a cost and impact on individual bodies with differing resources and capacities. What I would have wished is to be able to discover and consider these corporal interventions rather than be guided in a group to glimpse them.

It’s a testimony to Dorner’s concept and execution and to the dancers’ stamina that the work still manages to surprise.